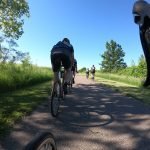 After skipping 2020, the MS 150 was back on this year albiet in a dramatically different format. The most significant change was that it was not a 150 mile route from Proctor, MN to White Bear Lake, MN. Instead it was a 75 mile loop starting and ending in Blaine, MN. I felt a little guilty about raising money to ride 150 miles and only riding 75. My friend Dan mentioned that he might start from our office in Eden Prairie to do a full 150 which interested me. Weeks went by however and there was no more mention of it.

Another change this year was that our team was given a specific time period to start. Typically, they just say everyone has to be on the road by a certain time and we all just start whenever we want before that. The nice thing about this change was that I got to see a lot of Team Robinson people out on the road. I arrived well ahead of our start time, got everything ready and hopped on my bike. It was at this point that I realized I forgot my bike shoes at home! I was wearing some old running shoes which I was totally capable of riding with so I just decided to proceed with those. 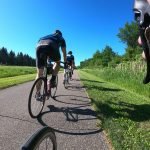 I was thrilled to run into some friends and coworkers at the start who I had not seen since 2019! I set out with my friends Mark and Ryan. Mark is a beast who rides a single speed and would gladly ride in front the entire time if we let him. Ryan is also a very strong cyclist who also happens to be a fellow runner. Of course, Mark hopped in front after the first few hundred feet and before we knew it we were chugging along at 22 mph! After about 4 miles, I jumped on the front. I was a little concerned about maintaining the speed while wearing running shoes but I managed. After about 5 or 6 miles, we passed our friend Dan who was with another group but he decided to hop aboard our train. The four of us rode together to the finish.

There were rest stops every 15 to 20 miles and we stopped at each one. They provided snacks, water and Gatorade powder so I loaded up each time saving the 3 Clif bars I brought with for an emergency. We picked up other riders at a couple stops but they ended up falling out the back of the group after a few miles leaving the four of us again until the next stop. 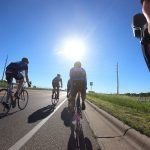 Mark and Dan did the majority of the pulling but I volunteered to do a pull somewhere between mile 40 and 50 completely unaware that this would be the steepest climb of the route. We were also heading straight into the wind now. This section really drained my energy and I was elated to arrive at the next rest stop. I slammed a bottle of water and filled both of my water bottles with Gatorade. We were somewhere around mile 55 at this point and I was starting to feel fatigued.

We set out again and I hopped in the back to recover for the next 10 miles. I was amazed by how strong Ryan was riding on the front and actually started to worry about getting dropped. I ate a Clif bar and took a big hit of Gatorade giving me a noticable energy boost. That combined with a downhill section allowed me to gather myself.

The last section of the ride was super windy and tough. I was feeling better and took a turn at the front for a few miles but Mark and Ryan did the majority of work on this part of the ride. I looked at my Garmin and it said we were at mile 73 and in no time we were at the finish. The four of us agreed to ride across the finish side-by-side. I am anxious to see that photo.