After years of checking out the website for this race, I finally registered. It seemed like a great way to ‘try’ doing an ultra-marathon. I say ‘try’ because this race is time-based and does not have a set distance. You run for 480 minutes (8 hours) and see how many loops you can run. My goal was to reach 50k which was the next distance to check off my bucketlist. 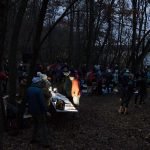 There is one catch however. The main loop is 7 miles and you must complete the loop for any of it to count. If you only run 3 miles of it, it will count as 0. After 6 and a half hours they open up a 1 mile loop so if you don’t think you can complete another 7, you can switch over to the 1 mile loop.

The nice thing about this type of race is that there is not requirement to complete a distance. If you can run 35 miles, you are free to do so or you can only run 7, it’s all good. A significant number of people just do 1 or 2 loops and call it a day. This makes it a very low-stress race. I tried to recruit as many friends as I could using the low-stress factor as a selling point. All were busy or uninterested except for one… my friend Catherine which was cool because she also happens to be the person I have run with the most over the past year. 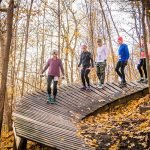 This race is in River Falls, Wisconsin so I picked up Catherine the morning of the race and we drove about 50 minutes to the start line. We planned to arrive as close to the 8 am start as possible to maximize sleep. The plan worked out pretty well. We pulled up, parked and got our packets and had just enough time to grab our gear for the race. You can place a container with supplies at the aid station so I brought a plastic bin full of Gatorade, Clif bars, sandwiches and extra gear. In no time, we were off!

The first few miles were basically walking single-file. It was a single track path and, unfortunately, a lot of walkers and slower runners decided to start at the front and seemed uninterested in moving over for the crowd behind them. Eventually we were running but the entire first loop was really crowded. When we reached the end of the loop, Catherine suggested that we roll through it and I agreed. This ended up being a genius move because everyone else stopped. We suddenly had a wide open path to run on.

Long story short. The next two loops were a case of running the flats and walking the hills. I accidentally kicked a ton of roots because I was not picking up my feet enough. I do not pick my feet up a lot at a fast pace so at the slower trail pace, I was practically shuffling. I almost fell numerous times and actually bit the dirt 3 times. Once was right in front of the main aid station filled with people. Everyone gasped. I jumped up and waved to the crowd and the all cheered. 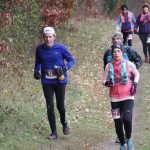 By the fourth loop, my legs were feeling pretty fatigued. After running nine marathons, I know what it feels like when you reach the late miles. One thing that really surprised me in this race was that mile 26 felt exactly the same as mile 26 of every marathon I have done. I though running slow on trails would allow me to run longer without fatigue. Here is the thing that really shocked me. As fatigued as I was after mile 26, I could still keep going.

By the end of the fourth loop, my knee was getting really sore. This was a familiar pain that I had not had in many years. Runner’s Knee. I knew it because it was sore when I lifted my knee, not when I stepped on it. In fact, running uphill felt fine but descending was really painful. I used to deal with this every spring before I started through the winters. 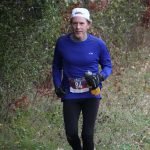 By the end of the fourth loop we were both feeling pretty rough and agreed that this would be the last 7 mile loop. Upon completing the 4th loop, we pulled into the aid station at 1:30 pm which meant that the 1 mile loop would not open for another hour. Initially, we just started waiting but after running 28 miles, I was sweaty and feeling colder by the minute. With 2.5 hours remaining, we decided not to wait and instead, try walking the final loop just to keep moving.

We walked the first few hundred yards but we both noticed that running was not as hard as we thought. Soon, Catherine was full-on running so I picked up the pace as well. My knee was in a lot of pain but I was still able to run. I’ll never forget hearing the last thing you want your running partner to say after 30 miles of running, “I am getting a second wind”. I believe she said ‘fourth wind’ but whatever. To be honest, this helped a lot because I ended up getting a second wind myself and we actually ended up running the final loop at a respectable pace.

We were both done after that 5th loop and decided to call it a day. A spectator told us that we could change at a brewery just down the street. We drove over, changed in to dry street clothes, had a beer and headed back to Minneapolis as ultra-marathoners. That night I checked 50k off of my bucketlist. 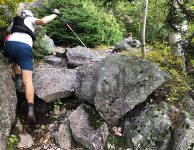 Pacing In The Superior 100