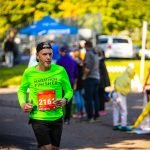 I have already gone into detail in past posts about why I signed up for the Twin Cities Marathon so I will skip that. I would like to mention however that this is not my first time running this race. Back in 2013, this was my second marathon. My experience in 2013 was both positive and negative because I dropped my finish time from 4:45 to 3:58 that year but the final 8 miles were extremely difficult. I was cramping by mile 18 and a long, nasty hill at mile 21 that seemed like Mount Everest. Since then, I have run 6 marathons gained a lot of experience. I was confident that this would be a much different race than in 2013. 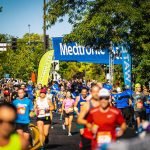 I have also gained a lot of running friends in that time and several of them were running this race. My friend James and I found each other after a few texts. He was also waiting for some other friends. Since we were all designated Corral 1, I lined up with them. They were shooting for 4 hours so we were in the back of the corral. 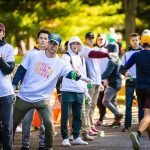 After the start, we stayd close for the first half mile. The pace seemed uncomfortable so I started speeding up until I found a pace that I felt I could hold comfortably for the next several hours. 8:00 minutes/mile was the sweet spot. Everyone around was maintaining about 9:00 to 9:30 so I started passing a lot of people.

I was running in very familiar territory when got to mile 3. The section between miles 5 and 6 is pretty close to my house and I run that multiple times each week. The GEAR Running Store was setup at mile 6 and handing out bananas. This is where I always come to watch this race and help hand out bananas. This was also the first spot where I spotted my wife who cheered as I passed. 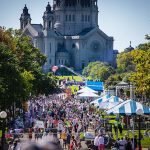 After rounding Lake Harriet, the course turned down Minnehaha Parkway. My friend Peter was at that intersection and yelled when he spotted me. The route along the Minnehaha Parkway is very high energy and the spectators go all-out with decorations, music and partying. It is real easy to lose focus on your pace here. Eventually, you reach Lake Nokomis and take the long way around it before heading to the Mississippi river. I ran for a mile or so around Nokomis with my friend Chris who I camped with at Afton this summer. 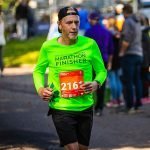 Once I reached the river, thoughts of the 2013 race started popping into my head. This is a very long stretch before crossing the brisge into St. Paul and it is also where my struggles began in 2013. As I approached the bridge, it was shocking to realize how much better I was doing this time. No cramping, no nutrition issues and I was running so much faster. Those thoughts of 2013 kept popping up at various points through the rest of the race. It was pretty cool to see how much better I have gotten at running marathons and running in general in the past 6 years. As I crossed the Franklin Bridge into St. Paul, I excited to see my daughter who also spotted me so we both yelled and waved. One of my favorite moments in the race. 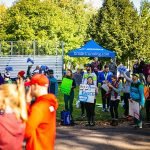 Right after crossing into St. Paul, you reach “The Wall”. It is a giant inflatable wall that you run through at the 20 mile marker. I assessed how I felt and there was no indication of hitting the wall anytime soon. This was important because the long hill that I mentioned at the beginning of this post was only about a mile away. People were starting to walk at this point and I even saw one woman throwing up.

As I approached the hill, I told myself that walking was not allowed. I kept my cadence the same and shortened my stride. Even though my pace slowed, I was passing a lot of people. About half of them were walking up the hill. I was surprised at the top because it seemed so easy. Of course, I had forgotten that there was a second, steeper hill less than a quarter mile down the road. I used the same strategy on the second hill and, in no time, was at the top and approaching the last big stretch of the race… Summit Avenue. 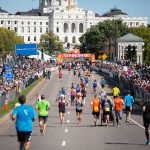 Summit Avenue is a long, straight run with a lot of small, rolling hills. In 2013, I had to walk many times onlong this stretch. This year? I was starting to feel a little sore but had no trouble running the entire way. At the very end of Summit, you take a gradual corner to the left and you see the cathedral shown in many marathon finish photos and you realize that you are very close to the finsh. Then you take a gradual turn to the right and you see the finish. It is about a quarter mile away and all downhill. I went into a full sprint at that point.

I crossed the finish line with a time of 03:31:50. My ninth marathon and the third fastest!