Pacing In The Superior 100

Last spring my friend, Dmitry, asked me if I would pace him in the Superior 100 ultra-marathon. It was a no brainer and of course I said yes for multiple reasons. One, I be a part of a friend’s major accomplishment. Two, it would allow me to see the infamous Superior 100 race first hand. And three, I have always wanted to pace someone in an ultra-marathon. 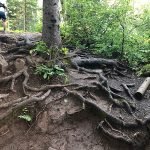 Months passed and there was no communication. I even started to wonder if Dmitry had backed out and forgot to tell me. About a month before the race, he contacted me and we started planning what my job would be and the logistics involved. We eventually decided that I would ride to the race with his wife, Olga, and we would meet him at the 60 mile mark. Then I would run (approximately) every other leg to the finish.

Dmitry started the race at 8 am on Friday. Olga picked me up and we drove 5 hours to the Crosby Manitou aid station. The plan was to get there before Dmitry and wait for him. We found our way there, parked the car and walked to the aid station. As we entered the aid station at about 10:30 pm, a runner appeared from a dark, wooded trail. It was Dmitry! He had also just arrived and looked great. The timing was unbelievable. I immediately put on my gear and off we went.

The terrain was unbelievably difficult. The word ‘technical’ doesn’t even begin to describe this nonsense. The ground was littered with large tree roots. Some were even protruding out of the ground in dangerous loops. Then we encountered large, slippery rocks that we had to climb over. It was also dark so we were navigating all 9.4 miles of this with our headlamps. There were a occasional encounters with other runners also. Either passing them or we would move aside to let them pass us. The arch of my right foot was getting really sore from repeatedly landing on the roots which made me a bit concerned. 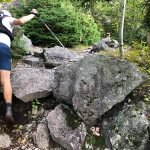 At 3:30 am we arrived at the next aid station. They had all-you-can-eat hash browns, fig newtons, cookies, sandwiches, the works. Olga was great and started getting us whatever we wanted. Dmitry and I chowed down and within 10 minutes he was off running solo again. Olga and I drove to the next station, set an alarm and slept in the car. The alarm went off and I felt surprisingly good after only a couple hours of sleep. I grabbed my gear and met Dmitry for a short 5.5 mile stretch. He arrived as the sun came up and within a few minutes we were off again. This was a relatively short leg but it was not the easiest by any means. It was essentially and big climb up to Carlton Peak followed by a long descent. It seemed to go by fast. The terrain was far less hazardous than that last leg that I did so we were able to go a lot faster. Dmitry was amazing and seemed completely unstoppable. I was in awe at how easily he was making this look. As we entered the woods, I mentioned that my foot was sore from the roots. He laughed and said that he had not felt his feet for miles. Oh ya, I forgot that he had run 80 miles so far and I had run 10 so I stopped whining. In no time at all we were at the next station and Dmitry went out solo again. 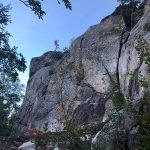 Olga and I sped to the final aid station knowing that Dmitry would be moving faster now. We arrived at the station with a lot of time to spare so we sat in some chairs and watched other runners come through the station. This was mile 95 and the finish was about 8 miles away (the course is actually 103 miles). Most runners looked surprisingly good but a few were having a lot of trouble. It looked like they were done but, somehow, they all got up and staggered back into the woods. Soon Dmitry appeared and, after a few snacks and a water refill, we were off! The next stop was the finish line in Lutsen.

There was also a 50 mile race and a trail marathon sharing the same trail and the top marathoners began to pass us. They were charging up the steep climbs with unbelievable authority. They were also really good sports and all of them would congratulate Dmitry on getting so far as they passed by. The terrain was even easier than the last leg and were able to run a lot of it. We met my friend Amy at one station and she told us to listen for the river. When you can hear it, you are close to the finish. As we were running, Dmitry noticed the sound and mentioned it. She was right because the terrain suddenly changed from trail to road. After one more short foray into the forest, we ended up on a gravel road. This was the road to the finish! 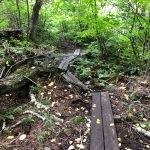 Dmitry led the way and was running a 9 minute/mile pace with ease. A few spectators started appearing along the road and cheered as we passed. We were led around a build and as soon as we came around the corner there was a big crowd, the finish line and Dmitry’s name was announced over the PA system. We talked on the trail about how he wanted to come across the line and he said that we should cross it together. I agreed to follow him. He crossed the finish line 28 hours and 44 minutes after he started and finished 34th out of 180 runners. 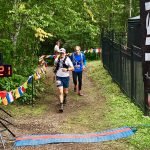 He did it! It was unbelievable to watch someone conquer 100 miles with such authority. It was also much more rewarding to be a part of than I had ever imagined. Dmitry and Olga were both so happy and thanked me numerous times. I felt like I should thank them for allowing me to be a part of it.

This experience had a big impact on me and inspired me to want to attempt it. The first step is to qualify by running a 50 mile race. My plan is to sign up for the Voyageur Trail 50 mile next July and see how it goes.