After purchasing a USAC license last winter, I started searching for races. It was well before the race season so there were only a couple on the calendar and the La Crosse Omnium was one of them. Nothing was open for registration yet so I had to wait.

I had never heard of an Omnium before but I learned that it is a multi-stage bike race that began in track racing. According to Wikipedia, road racing has also adopted the term to describe multi-day races that feature the three primary road race events (time trial, mass start and criterium). This is a perfect description of the La Crosse Omnium. This was a weekend-long event that consisted of time-trial on Friday, a road race on Saturday and a criterium on Sunday.

After getting my license, my instinct is to start working on becoming a Cat 4 racer. The La Crosse Omnium is great for this because the road race and crit award points toward upgrading.

I found a relatively cheap hotel, took a day off of work and drove my loaded-down Prius to La Crosse, WI. The race wisely holds the time-trials on Friday evening so most out-of-town racers can arrive the same day. I tried not to think about the race during the drive because it just made me nervous.

I got to the time-trial early just avoid parking hassles and to get a feel for how a bike race works. The course was only 2.4 miles the first half of it was solid climbing. They called for Cat 5’s to line up and we were dispatched every 15 seconds. I felt like I paced myself well but noticed halfway through that the guy behind me was catching up. I dug deeper but he still caught me at the 2 mile mark. I finished 18th out of 23.

The next day was the road race which was 28 miles (two 14 mile laps) with a neutral leadout. My only familiarity of a leadout was from racing on Zwift. It was basically a mile of jockeying for position behind a pace car. There were 42 racers in this event and I managed to work up to the first 10 or so by the start and held that for several miles until we hit the hill. The hill was massive and the peloton quickly dissolved. Three guys pulled off the front and they were gone. By the top, a lot of us were solo and the largest groups were 4 or 5 people. A 3-person group passed me and I latched on. We were actually a pretty strong group and managed to pass quite a few others. One guy got dropped but we picked up another. There were only two frightening moments in this race. One was when I rubbed tires with the guy in front of me at 28 mph and the other was when we bombed down a huge hill in a paceline at over 48 mph. I was gassed by mile 26 and dropped back to finish 29th out of 44.

The crit was a 4 block by 1 block rectangle in downtown La Crosse and was a half-hour long. My plan was to, once again, go out hard at the start, stay near the front on hold on as long as possible. However, at the start, I could not get my right foot in the cleat and had to stop as everyone else flew by. I ended up being the absolute last racer to start. I went into a full-on sprint to catch up. I slowly passed a few other riders and one of them dropped into my draft. The two of us helped each other out until we were lapped by the peloton with about 5 minutes left. He road with them (which I think is illegal but not sure) and I stayed solo. I short time later I passed him and he was done. There was a nasty crash involving three racers halfway through but I was so far back that I did not even know about it until after the race. I finished 22nd out of 32.

Overall I finished 31st out of 40 but the result was of little concern. I had met some other Cat 5 racers going through the same experience as myself and I had a great time. This race is extremely well organized and La Crosse is a cool town.

The drive home was amazing. I went through the scenic Mississippi River valley listening to Explosions In The Sky and reflecting on a weekend that I will never forget. All of the fear and tension before the race turned into joy and satisfaction. The sun was shining, my car was completely filled with bike stuff and I was now a Cat 5 road bike racer. 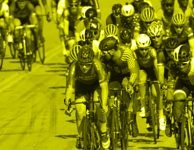