This is a weekly Criterium race held at the State Fair Grounds in St. Paul, MN. There is no online registration so you just show up with $25 cash and race. The thing is, I am signed up for the La Crosse Omnium which is a 3-stage race and I have never done a real bike race. This race seemed like the perfect way to get a little race experience before the Omnium.

I showed up and paid the $25 fee, attached my number and lined up at the start. Somehow, I managed to not think about it too much for fear of backing out. It worked. Before I knew it, I was taking off with 79 other riders.

The main thing that I learned was to NOT lineup near the back of the group. You have little to no chance of getting in the peloton and will basically be out of the race before you even get to the start line. This is what I did. When I reached the second corner, I realized that I was the absolute last rider and had to drill it to catch up with the last group. After a short period with them, I decided to make a break for the next group up ahead. I was pushing about 300 watts but couldn’t reach them. Now I was riding by myself and wasting a ton of energy.

A few other lessons learned were… do not overlap wheels and you must move out of the way when you are getting lapped.

After a while, the two lead riders passed by as they lapped me. Behind them was the peloton. I tried to latch on but there was a lot of commotion and I wasn’t able to. Soon another smaller group of 6 passed by and I was able to merge into their group. Now I was moving at a much more respectable speed and was only doing about 220 watts.

I rode with that group for the rest of the race and ended up lapping some other riders. Our group actually disintegrated about a half lap from the finish when the main peloton lapped us. I moved to the right to let them pass but some of the riders in my group did not. A lot of shouting ensued.

There were several sprint laps but I was so far out of contention that I wasn’t even able to see them. The final result was 60th place out of 80. I have to say that, after doing a real race, it was surprising how similar it was to racing on Zwift. 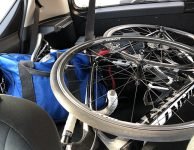