Typically, I would not register for a fat bike race. However, I recently purchased a USA Cycling license and want to start earning points. I did a search for races in the area and, much to my chagrin, it looks like Minnesota has very few USAC races compared to other parts of the country. I will basically have to do every race that I can to move up.

The first result that showed up in my search was the Ham Lake Snowbowl Fat Tire Race. It is obviously not a road race but I own a fat bike and need to start somewhere. This race was still about three weeks away so I checked the extended weather forecast. Partly cloudy and 27 degrees. Wow, perfect! I registered.

Each day as race day approached I checked the forecast and each day the predicted temperature was lower. By the time that the forecast was no longer considered “extended”, the temperature was in the single digits.One week before the race I took the fat bike to some wilderness trails for preparation ride. It was a complete disaster. I had no idea how worn my tires were. I always ride it on plowed city trails and never noticed how much traction they had lost. Decision time. Should I spend $160 on tires just to do this race are ride on worn tires. The next day I drove 22 miles one way to the course to take a look at the surface. The portion I could see wasn’t too bad so I opted for the latter.

So now I am riding on worn tires in single digit temperatures. What have I gotten myself into?

On race day I packed my gear, put the bike on the car rack and set out for Ham Lake. When I arrived the temperature on the dash of my car read -1 degree(!). “This is totally going to suck” I said to myself (apparently, I need to work on my self motivation skills). I got my number and wheeled over to the start line. There were only four of us in the race! Four! The official gave us a little info about the course and said that the race was five laps.

I was second in line and the gentleman in front had carbon HED wheels and looked pretty serious. The official yelled Go! and off we went. The first rider took off and was out of sight in no time. I was doing alright until we got to the icy lake where my traction disappeared. The others rode past as I slipped and slid my way across the lake. I simply could not stay upright for more than 50 feet without slipping.

After one and a half laps of struggling, I realized that I needed to try deflating my tires a bit. They were about 20 psi and I dropped them to approximately 15 psi. The leader rode by and lapped me while doing so. The deflated tires helped and I was able to go a little further without slipping. Soon, the second rider lapped me. The only good news was that each lap was getting easier and taking me less time.

I continued on and eventually the leader lapped me a second time. The dude was flying along trail with ease. Then the second rider lapped me. The third had not lapped me and I would occasionally see him across the field. As I finished my third lap, the leader had already finished the race and was cheering people on.

As I approached the end of my fourth lap, the officials were waving at me to stop so I did. A gentleman informed me that it was taking me about 20 minutes per lap and pointed to a countdown clock that read 17:3x minutes. He said that I did not have enough time to complete the lap and they had to shut down by then. I asked if I would have to take a DNF and they laughed and said no. In fact, he said, you are the only one over 40 years old and you have won your age group. He told me that I can go to the tent to receive my prize.

I parked the bike and ran to my car to get a free drink ticket. When I returned I could hear an announcer saying “Dave… hmm, I can’t read this name” then “Oh, he is still out on the course?”. I darted up to the stage and informed him that I was there. He the announced to the crowd that I was the winner of my age group then another gentleman put the medal around my neck. They told me to step up on the podium so I did. There was a crowd of 50 or so people applauding and a half dozen cameras took my photo. It was hilarious.

There were several points during this race where I was totally ready to give up and take the DNF. Man, am I glad I stuck with it. 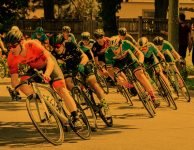