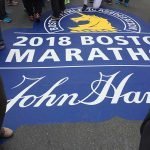 I realize that it has been a long time since my last post but, honestly, not much has actually happened since then. I was supposed to be training for the 2018 Boston Marathon but I really do not like winter training so I never actually did. I just decided to deal with the consequences on race day. Not exactly the best strategy and I would not recommend it. Here is how it went. 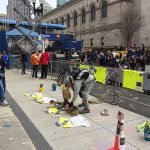 Five years since the tragedy

The Boston Marathon is always on Patriot’s Day which is the third Monday in April. This year it was on April 16. My wife, two daughters and mother-in-law and I flew to Boston on the Friday before the race (Friday the 13th). For months I had been stressing about this race but, for some strange reason, the stress disappeared and I suddenly felt really relaxed. Maybe it was the fact that, unlike my previous marathons, I had actually done this one before. Maybe it because I had already decided no desire to race this time. Whatever it was, I was calm and enjoying every detail of this trip. One thing that did cause a slight concern was the weather forecast which was for cold temps and constant rain all day long. I enjoy running in the rain so this was not too big of a deal. The plan I devised was to carb-load thoroughly, run slow, come to complete stops for fluids, eat 4 or 5 gels and get some good photos and videos.

When we arrived on Friday morning it was 67 degrees and sunny. By total coincidence, the expo this year was directly across the street from our hotel. I did not want to get stuck in a long line like last year so, after some lunch, I went immediately to the expo to get my packet and race shirt. I also bought a jacket and another shirt.

On Saturday, the forecast for Monday was looking worse. 40 degrees, heavy rain and 25 mph winds directly in our face. My friend John was also in town for the marathon and a mutual friend of ours, Catherine, actually lives in Boston. Early that week, Catherine had invited John and I to run with her group that Saturday. It was a beautiful, warm, sunny morning. It was great to see Cath again and it ended up being the most fun run that I have had in months. The three of us met again that evening for a beer at the Cambridge Brewing Company. John and I were proudly sporting our Boston jackets. Sunday was rest day so I just chilled. My goal was to eat at least 600 grams of carbs and keep drinking water all day. I succeeded with ease and was in bed by 11:00 PM.

Monday morning I woke up at 5:30 AM and immediately looked outside. What I saw made me seriously consider backing out. The rain was coming down incredibly hard and the trees were all bending over from the intense winds. Fortunately I could not see the temperature or I would definitely have just gone back to bed. Had this been a solo training run, I would have bailed but then the fact that there were 30,000 people looking out their windows right now and seeing the exact same thing. They are going to run today and I will be one of them. 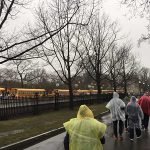 Shuttles lined up in Boston

I ate my usual pre-race breakfast of Pop-Tarts and coffee, gathered my effects and caught the hotel shuttle. Walking to the shuttle was the first time that I discovered how cold it was. It was so f’ing cold! I got off the shuttle and walked about 6 blocks to stand in line for the shuttle to the starting line. It was absolutely miserable. The shuttle was warm and I shared a seat with a gentleman running his 29th consecutive Boston. He said this was by far the worst conditions that he had witnessed. Oh, he also shoved a Gatorade bottle up the leg of his shorts and took a piss right there in the seat. Awkward. 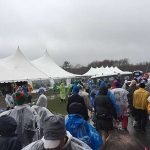 We got off the shuttle and walked about 4 blocks to Athlete Village which was a school yard. The grass was so muddy that everyone just stood on the small paved area. There was no room to sit down so we all just stood there for 90 to 120 minutes shivering in the wind and rain. It was absolutely awful. Finally, the announcer called for Wave 2 to proceed to the start. This walk is about 3/4 of a mile. Once in our corrals, we waiting another 20 minutes or so. At this point the wind was directly in our faces so everyone was facing backwards. I wanted to get some photos of the military presence but my hands were too numb to operate my phone. It seemed like an eternity had passed when they FINALLY signalled for us to start. It felt good to be moving and generating heat. 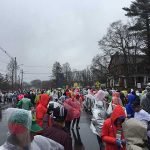 The Boston Marathon is unique in that you start in a corral of runners who all qualified with a similar time that you did. There are no pacers. Last year I started running at a 7:30 min/mile pace which is what I qualified with. Everyone around me was running that pace so I stayed with them. This ended up being a huge mistake. Many of these people live in places like South Carolina, Texas or Oregon and have been training as hard as the race they BQ’d in. This year, I was determined to run slow and let them all pass by.

After a few miles it occurred to me that, despite the awful weather, the crowd was out in full force! Not only were they standing outside in the elements along with us but they were ON! This is the crowd that I remembered from last year and why I came back again. The spectators at the Boston Marathon are so passionate about this race. All that mattered today was representing Boston Strong for these people. 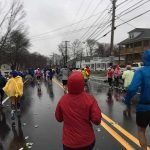 Since I was taking my time, I was also able to get some photos and videos. My favorite is the famed Scream Tunnel at Wellesley College. I also got a video of rounding the corner at the famed Newton Fire Station. After this corner, you immediately start climbing the first of four Newton Hills. The last of which is the largest, Heartbreak Hill. My strategy of running slow was starting to pay off and I actually enjoyed the change of pace as I climbed the hills. Last year, the peak of Heartbreak Hill was uneventful. This year, however, there were people cheering and a gentleman near me let out a loud cheer. 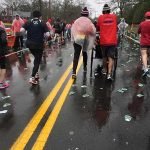 Just after Heartbreak Hill was where I began to struggle last year. This year, however, I felt good. Really good. This is the portion of the course where the crowd gets larger and more intense. I started to give fist pumps and cheers to the crowd which always sparks a great response. It was awesome! Unfortunately, a lot of runners were struggling badly at this point and not sharing my enthusiasm. Soon the Citgo sign was visible and I thought to myself, “Here I am in the final miles the Boston Marathon!!!”. I knew at that point that I was going to finish with ease.

The rain had still not let up one bit. The water in the streets was not draining fast enough so the high winds were actually creating waves in the street! My pants were so full of water that the elastic waist band was not able to hold them up very well. I was constantly having to stop and pull them up. 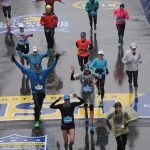 Notice my belt sliding down

As I took a right on Hereford Street, my pants began to fall. Two blocks later, I took the left onto Boylston and could see the famed finish line. I had to hold up my pants with one hand while I ran down the final stretch. As I crossed the finish line, I threw my hand into the air and immediately had to grab my pants so they wouldn’t fall to my knees at the finish. Fortunately, none of this is evident in my photo at the finish line. It just shows me crossing with my arms in the air.

I had zero interest in my finish time and did not even consider looking it up. Eventually, my sister sent me a text with my splits and finish time of 4:17. It was almost an hour slower that my qualifying race but I really did not care at all. I was just glad to survive in awful conditions and no training. As much as I love this race, I have absolutely zero interest in ever running it again. I can not wait to come back as a spectator though. Or, maybe even a volunteer. I had not just finished a marathon. I had just finished my second consecutive Boston Marathon. Far exceeding my wildest dreams. I had never even considered such a feat in my bucketlist.