After running the Boston Marathon last spring, I decided to make an attempt to return in 2018. I realized that this would require me to put aside my summer plans, find a qualifying race and train hard for 18 weeks. It was a risky plan. I had never signed up for a marathon with the sole purpose of getting a BQ. What if I spend 18 weeks training like crazy but still fail on race day?

The registration for Boston 2018 was to begin on September 11, 2017. This meant that qualifying race would need to be before that date but not TOO much before since I needed 18 weeks to train for it. The race I chose was the Dick Beardsley Marathon in Detroit Lakes on September 9. Only two days before the Boston registration opened. So close that there would be no second chance if I failed. My qualifying time was 3:30 but the BAA typically cuts it by a minute or two depending on the number of registrants. They also allow people who were 20, 10 and 5 minutes faster to register on separate, earlier dates. Because of this, I really wanted to hit 3:25 or better to significantly increase my odds of getting in.

For a training plan, I chose the Pfitzinger 18/70 plan that I used to qualify the first time. The first workout was on May 8 – only three weeks after running Boston and I was focused. I spent the entire summer waking up early and training hard. Just when I was starting to get really sick of running, it was time to taper and get ready to carbo-load. Carbo-loading was one part of marathon preparation that I had never really taken too seriously. However, after the trouble that I had in the late miles of the Boston Marathon, I decided to it right this time. I needed to take in about 600g of carbs, drink water non-stop and minimize my fiber intake on the day before the race.

The stress was getting to me during the week before the race. Whenever I started to second-guess my plan, I tried to think of something else. Finally, the day before the race arrived and I got in my car and drove four hours to Detroit Lakes. There are basically two choices for a vegan to eat on the road. Subway and Chipotle. Using the Chipotle website, I designed a burrito with maximum carbs and minimum fiber then found a Chipotle along the route to stop at for lunch. I stopped and ordered TWO burritos. One to eat there and another to eat later. I drank water constantly and snacked on Clif bars and fig bars throughout the day. For dinner, I went to the pre-race pasta meal.

After the pasta meal, Dick Beardsley himself got up and spoke. WOW! He was fantastic! He told some stories then pulled out a guitar and sang some songs that he had written. He also talked a little about his son who had committed suicide a few years prior and concluded with some encouraging, inspirational words. He received a standing ovation.

When I arrived back at the hotel, I discovered that their continental breakfast begins at 7am. The same time as my race. I was on my own for a pre-race meal so I drove to a nearby Holiday station and bought some Pop-Tarts. The rest of the evening was spent drinking water and playing StarCraft to take my mind off the race. I also like to drink a beer the night before a race so I brought one from home and drank it.Just before I was about to go to bed my wife and daughter drove separately and arrived. After a brief chat, we set our alarms for 6am and went to sleep. 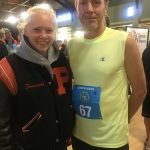 I woke up, ate the Pop-Tarts, drank a cup of coffee and drove over the race. The sky was crystal clear and it was about 50 degrees. Perfect. All of the variables were good and I was ready. The really strange thing is that the nervousness from the previous days had somehow turned into exuberance. I was surprisingly relaxed but had a strong desire to start running. This was a small marathon with only 115 runners so felt confident lining up close to the front. Dick Beardsley said a few words and the gun went off.

I ran with the crowd for the first quarter-mile but sped up after a quarter-mile. I passed a few dozen runners before settling in on a 7:15 min/mile pace. Soon there were only few runners on the vicinity. A gentleman with red shirt and yellow hat was about 20 yards ahead and another runner in blue shirt about the same distance behind me. Red Shirt sped up. I was feeling pretty good and did the same. At mile 3 my watch indicated an overall pace of 7:11 and Red Shirt was speeding up again. I felt good but knew from experience that going too fast now would come back to bite me later. I slowed to a 7:20 pace and watched Red Shirt slowly disappear into the distance. I looked back and Blue Shirt was gone also. There was actually nobody else within sight now. 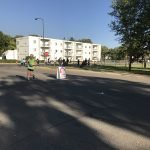 I was completely alone until mile 10 when Blue Shirt reappeared behind me in the distance. He was definitely making up for lost time because he was noticeably getting closer every time I checked. There was a turnaround at mile 13 which allowed me to see that Red Shirt was now about a half mile ahead and Blue Shirt was about 50 yards behind. At mile 14 there was a stretch along the lake where we were running directly into a powerful wind. It slowed me down to a 7:30 pace overall. Shortly after that, Blue Shirt caught me. As he passed, we both vented to each other about how awful that windy stretch was. 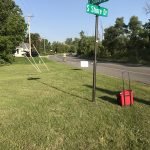 Once he disappeared into the distance, I was completely alone again for several miles. The 20 mile mark was near a bridge and as I crossed, two runners appeared ahead in the distance. The course took a right turn after the bridge and after making the turn, you face the largest hill in the race. Why do marathons always plan these awful hills at the 20 mile point? I took it easy up the hill but didn’t walk. Thankfully, after reaching the top, there was a long, gradual downhill where I was able to pick up speed and make up a lot of time. Once the course levelled off again, I could see that there were now three runners ahead. The two I had seen previously had just passed a third runner. It wasn’t long before I passed all three.

Shortly after passing the 22 mile marker there was a short but steep hill. As I ran up I could see another runner at the top walking. It was Red Shirt! Remember the guy from mile 3 who took off? He was now walking and had been for quite a while. He tried to run again as I ran by but he quickly faded. 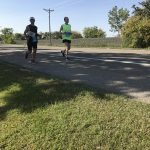 About a hundred yards after that, I could heard someone closing in on me. I thought maybe Red Shirt was getting a second wind but it turned out to be a pacer. My pace was still around 3:20 so I asked him is he was pacing 3:20. He responded “No, I’m 3:25”. Remember, I need to finish faster than 3:25 and now the 3:25 pacer was pacing me. All I could say was “Uh-oh”. He laughed and said “Don’t worry. I am running way ahead of my pace”. I ran with him for a while and chatted a bit. We passed by Ann and Savannah who were cheering near mile 23 and Ann yelled that we were runners 9 & 10 overall!

The pacer was a beast and picked up the pace. I kept with him for a while but had to slow down at some point while he kept running ahead. That little burst of speed really helped me make up some time and I could now see another runner who the pacer and I were both closing in on. It was Blue Shirt! This was beginning to seem like a reunion of all the guys who had passed me earlier.

The pacer had passed him already and I just as I was about to do the same, he stopped and grabbed his leg. He was limping as I ran by. I asked if he was okay and he said it was just a cramp. He started running again and somehow took off like a bat out of hell.

I reached a short but step hill just a half mile from the finish and decided to walk it to conserve energy for a dash to the finish. At the top I took off and passed another runner shortly afterward. As I hit the final stretch, the street had three people on it. Pacer followed by Blue Shirt followed by me. We were all spaced about 50 yards apart and running hard. Suddenly, pacer stopped just short of the finish. He turned around and high-fived Blue Shirt. As I passed, he said “Nice job” to me with a high-five and ran into the finish behind me. What a guy. I looked him up afterward and discovered that he has run marathons in the 2:40’s and could probably have won this race had he not been pacing. 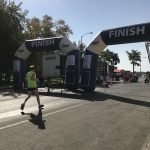 All I had to do now was cross the finish line. Wait a minute. There are two. One for the half marathon and one for the full. The cones lead me to the one on the right but the full marathon time-clock was on the left. It read 3:24:19. At the last-minute I swerved over to the left causing the photographer, who was positioned to take my photo, to suddenly get up and rush over to the other side. I can’t wait to see that photo. 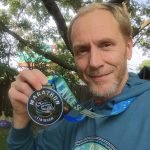 My checkout time at the hotel in 35 minutes so I got my finisher shirt and medal then went back to the room where I showered quickly before heading back home.