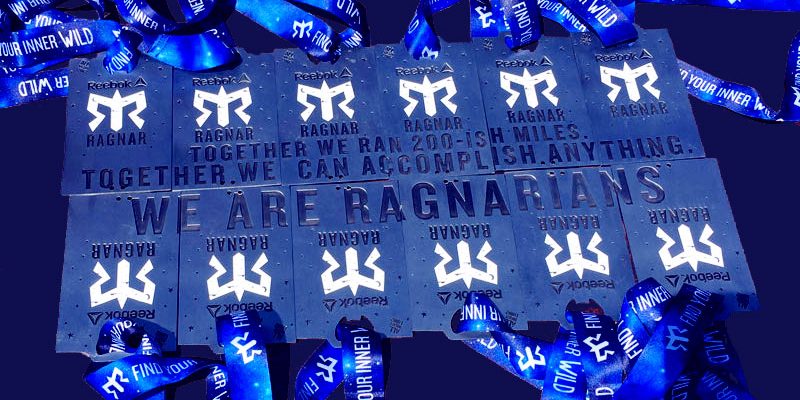 If you are not familiar with Ragnar, here is a brief description. Ragnar is a company that hosts multiple relay races in which teams compete against each other to carry a baton to the finish. The courses are approximately 200 miles and are broken up into 36 ‘legs’ of varying distances. Each team member is assigned 3 legs to run. Upon finishing a leg, they pass the baton to their teammate who then runs the next leg. This continues on for a couple of days and throughout the evening until, eventually, the runner assigned the final leg crosses the finish line.

There are also two distinct types of Ragnar races – trail and open road. Aside from the terrain, the formats are quite different. A road race is point to point and the team travels in a pair of vans along with the runners. The two vans leapfrog each other, doing sets of 6 legs while the other van rests. A trail race is centered around a camp site and the legs start and finish in the same location.

My chance to finally run a Ragnar

Last weekend, after years of being curious about Ragnar races, I finally had an opportunity to participate in one. What is surprising is that I was actually presented the opportunity to do not one but TWO Ragnar teams. One trail and one road. The trail race is still several weeks away but last weekend, I ran the road race. Here is how it went.

The name of this race is Ragnar Great River. It starts in Winona, MN and travels north roughly along the Mississippi River to the finish in Minneapolis, MN. Our team of 12 was called The Argyle Armada and we had 6 runners in each van. I was assigned to van 1 and legs 6, 18 and 30.

I packed the evening before we left and brought 3 sets of running gear individually packed in Ziploc bags, some baby wipes, 5 bath towels, a headlamp with a tail light and a reflective vest. For food, I brought some roasted potatoes, 2 PB&J sandwwiches, 5 Clif bars and a Vega chocolate bar. I have been a vegan long enough to know that small towns in Wisconsin are not the easiest places to find vegan food so I was prepared to go the distance just on the food that I packed.

I already knew Bill but the ride to the start gave me a chance to meet my other teammates in van 1: Noel, Marcus, Jim and Paul. Bill was assigned the first leg so we drove to the start and cheered as he took off. I was surprised by the endless parade of vans along the route as we drove. All of them were painted with humorous phrases, team names and their ‘kill count’. I learned that when you pass someone, it is called a ‘kill’. The Argyle Armada had never tracked kills before but I decided to on my own.

At one point along the route, we stopped to provide water support for a teammate and Noel got out and drew our name on the van along with some other cool artwork. Several hours and five legs later, I got ready for my first leg. Jim handed me the baton and I was off. This leg was 7.6 miles with some brutal hills from mile 4 to the end. After completing it I was sweating profusely and it was also raining. The baby wipes were completely useless so I just towelled off as well as I could and put on the dry clothes set aside for my next run.

At this point, our van had finished its first set of legs so van 2 took over. We drove ahead to Stockholm, WI to get a bite to eat and wait for van 2. We got a table at a tiny restaurant and, just as I thought, not a single item without meat or cheese. Oh well. I had some potato chips and a Two-Hearted Ale. Afterward, we hung out at a park on the shore of Lake Pepin. The scenery was unbelievable! I had no idea there were actual mountains so close to the Twin Cities! There was also a massive beach that looked like it could be on an island in the Caribbean. So cool. Ezra from van 2 arrived with the baton and handed it to Bill. Van 1 was off and running again. I kept seeing a team named Chasin’ Booty at the stops and they were always a few minutes ahead of us. It became my goal to pass them.

I told the guys that I had 8 kills in my first leg. They all recalled what they had and, before we knew it, we were all tracking our kills. Noel even decided to add our kill counts to the side of the van. We completed our second set of legs shortly before midnight and I had accumulated another 14 kills on my second leg. We drove to the point where we will take over running again. This also happened to be a school that allowed runners to shower and sleep in the gymnasium. The weather was really nice so most people just slept outside on the ground or, like me, in their van. Our van woke at 5 AM and set out to run our final set of legs.

At about 9 AM I finished the last leg for van 1 and handed the baton to Josh, the first runner for van 2. I racked up another 8 kills bringing my total to 30. Van 1 was done running so all we had to do was wait for Ezra to arrive at the finish line in Minneapolis. This would take several hours so we decided to get a bloody mary and some breakfast before heading to the finish. 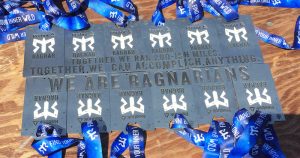 At approximately 3 PM, Ezra appeared and we all ran across the finish line together as a team. We received our finisher shirts and medals and spent a few hours hanging out at the beer garden. Interestingly, the back of each medal is a piece of a 12-piece puzzle so we took a photo of the completed puzzle. All I can say is that I now understand why so many people love Ragnar races. Working for two days as a team to complete a goal alongside several hundred other teams is a pretty great experience. Maybe I lucked out but all of the guys on my team were great and I gained some new friends.