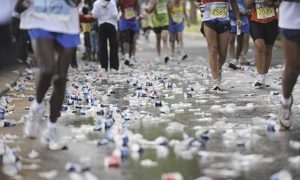 Water stops in races can be really chaotic. People crossing in front of each other. People stopping suddenly. People darting out into the running lane. There are also discarded paper cups EVERYWHERE and the ground is sticky from electrolyte drinks.

In the midst of all that, you also need to get a drink without spilling all over or choking. The most common technique to avoid spilling is to pinch or squeeze the top of the cup to form a narrow opening. This helps but to be honest, I still spill all over myself.

The most worrisome hazard is choking. It is surprisingly difficult to swallow a drink while you are mid-stride and breathing hard. You have to time your sips between inhales. If you get it wrong, you inhale water and go into a coughing fit. This happened to me in my first marathon and caused me to stop for several minutes so I could gather myself.

All of these hazards made me start hating water stops. In fact, I often avoided them unless I REALLY need water. Until now…

Two marathons ago, I tried something different. It was a small race and there was no one around me so, at the first water station, I came to a complete stop next to a garbage can. I drank the water without folding the cup and didn’t spill a drop. I threw the cup in the garbage and took off. All of this took about 8 seconds. It worked so well that I did the same thing at the next stop. And the next stop and every stop for the rest of the race.

For most of the race I could see a few people ahead in the distance. After several miles, it occurred to me that the people were the same distance away even though I was stopping to drink. The water stops were not slowing me down at all. In fact, I finished 16th out of 305 people, won an award for being third in my age group and qualified for the Boston Marathon. And, on top of all that, my hands and shirt were not sticky with gel and PowerAde.

This technique worked great in a small race but how would I do this in a race as crowded as The Boston Marathon? Well, the first stop did not go well. It was really crowded so when I stopped, the person behind me almost ran into me. There was a long row of tables so the only way I could pull over was to find a gap between them. Not good. By the third stop, I opted to go past all of the tables and pull over which worked great. 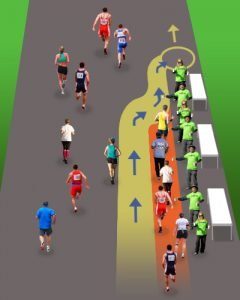 After a few more stops, I began to notice that there was minimal traffic on the far side of the water stop. The first few volunteers could not hand out cups fast enough while the volunteers at that far end seemed lonely and were hardly handing out any cups at all. There was also very little traffic at the far end. This worked perfectly with my new idea of pulling over after the tables. I just started bypassing all the volunteers until the end, at which point, I could easily pull over and eat/drink. Not only that but to take off, I had a wide-open road since the tables blocked all of the traffic. It was unbelievable how well this all worked.

This might sound kind of complicated so I whipped up a diagram to describe the technique (click to enlarge). Here it is from start to finish…

1) Skip all of the volunteers at the beginning of the water stop. Run several feet away to stay out of the chaotic zone (the orange area in the diagram). Avoid the orange area.

2) As you approach the final volunteers, there will be a lot less traffic so you should be able to pull in and grab a cup with ease.

3) You will also be at the end of the table where you can pull off the road to eat/drink without spilling or choking. This made an oval in the diagram to represent this area. Added bonus – there always a garbage can as well as table full of water nearby in case you want another cup to pour over your head.

4) Taking off again is easy since the tables block all of the traffic. You will have a wide open lane all to yourself to take off again.

5) You will have lost about 10 seconds but you’ll catch up with your pace group in no time. Net time lost – zero.

This worked in a small race with 300 runners and in one of the largest races with 28,000 runners. I also feel like making occasional stops for a couple of seconds helps on long runs. I will admit that I know absolutely nothing about the physiology of this and I may be wrong but it felt good.