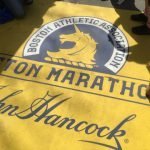 After qualifying for the Boston Marathon in 2015, I started asking people who had previously run it if they had any advice. Their responses often contained helpful things like “do some hill workouts” and “control the pace early on” but ALL of them contained this tidbit – “enjoy the experience”. To be honest, I was not exactly sure what they meant by this. Were they saying that qualifying for Boston was the real achievement and running it is merely the icing on the cake. Everyone knows that The Boston Marathon is a special race loaded with tradition, prestige and history. Maybe they were telling me to take in all of the grandeur of it. I wasn’t exactly sure. Now after running The Boston Marathon, I get it. Here is a full recap of my experience. 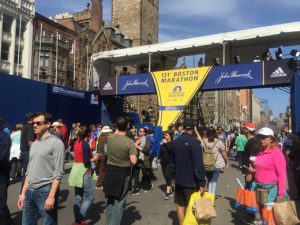 The weekend began on Saturday morning at the expo with a two-hour wait to get my packet. At ont point Scott Jurek was about 20 feet away at the Clif stand but I could not afford to lose my precious spot in line. After getting my packet, we ventured into the expo where I bought a jacket and a shirt. After yet another long line to pay, we were thoroughly sick of standing in lines and left. I had some free limited-edition socks waiting for me at the Strava stand so we headed over there. We stopped at the finish line on the way and took a few photos. As we left, I saw Dean Karnazes walking toward me on Boylston Street. I casually said “Hi Dean” as we passed and he turned around with a big smile and said “hi” back to me. Very cool!

On Sunday I opted to lay low while my family did some sight-seeing. Unfortunately, my plans of staying off my feet were thwarted since it was Easter and nothing was open. I ended up walking several blocks for breakfast and again for lunch. I had been watching the weather for days and the forecast for race day was sunny and a high of 65. A little warm but not bad.

I woke up at 6:30 AM on race day and donned my blue Run MSP shirt with a big Minnesota outline on it. My wife mentioned that the temperature was already 65. Yikes! Our hotel had a shuttle to the pickup area where the buses to Hopkinton were waiting. After the long ride to Hopkinton, we got off the bus and were led to “athlete’s village” to wait for our waves to be called. Overhead, you could see two large drones hovering. After a few hours of sitting in the grass, they called Wave 2 to the leave. I got in line and walked a mile the start line where military snipers were perched on the rooftops. The announcer mentioned that Ben Beach was in Corral 2 and was starting his 50th consecutive Boston Marathon! Shortly after that, the start gun went off.

The course began with a steep downhill. I had been advised by friends to hold back the pace early on which I did. There was virtually no conversation whatsoever but the miles were flying by regardless. My Run MSP shirt drew a surprising amount of “Yay Minnesota!” and “Go Minneapolis!” cheers. At mile 10 I was averaging 8:03 minutes/mile overall and it felt like I could hold it all day. Just to play it safe however, I opted to slow down down even more and go for an 8:23 pace which would result in a finish of 3 hours and 40 minutes. The Scream Tunnel at Wellesley College lived up to the hype. You could easily hear it a mile away. Lots of guys stopped for kisses. I think my wife and two daughters at mile 17 might have given the Wellesley girls a run for their money. They yelled extremely loud as I passed and cause all of runners around me to turn their heads. It provided me with a good laugh and an added boost. I was averaging about 8:20 so everything was looking great. 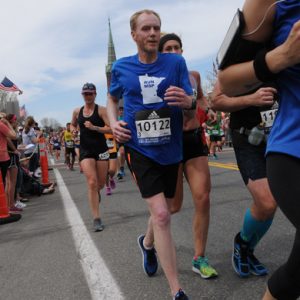 At mile 19 I saw the Newton Fire Station where we turned to the right. As soon as you round the station you are at the base of the first Newton Hill. These hills are no joke. Everyone slowed down a lot and more than a few people just walked up. I shortened my stride and patiently climbed it without too much trouble. Those hill workouts definitely paid off. After cresting the hill, there was a short downhill before the next climb. This was pretty much the routine for each of the four hills. The last of them is the notorious Heartbreak Hill which is also the largest. This hill also plays with your mind a little because you reach the top only to realize that there are basically two summits and, like the other hills, there is a slight downhill before you climb to the second summit about a quarter-mile away. The second one is the ‘real’ top of Heartbreak Hill. I eventually made it through the hills without too much trouble although some fatigue was setting in.

My overall pace at this point had dropped to 8:30 but everyone had told me that the course was mostly downhill after Heartbreak Hill so I should be easy to make up the time. I even began wondering if a final surge would be possible. As I ran downhill, it seemed like I was getting re-energized. Or so it seemed…

No more than a half-mile later, my calves starting to cramping. I had brought some tablets and lotion that I got at the expo for alleviating muscle cramps so I stopped and took all four tablets and applied ALL of the lotion. When I took off again, running suddenly seemed a lot more difficult. I was also starting to feel sick to my stomach. The miles were no longer flying by and the road was straight with no end in sight. I saw a mile sign in the distance and thought okay, that must be mile 24. Just two more miles to go. However, as I approached it, I noticed that it actually said 23. I let out a loud “AW FUCK!!!” and started walking.

This is when I witnessed first-hand what Boston Strong is all about. The crowds on both sides of the street started yelling.

Don’t walk Minneapolis. You can do this!

Come on Minneapolis, you’re not done yet. You have more work to do!

It seemed to be more than just random people encouraging a stranger from Minnesota to do well in a race. The earnestness of their shouts really got to me so I tried to break into stride again. I heard someone yell “Ya Minneapolis, that’s the way!!!” and both sides of the street broke into applause. I waved and kept running. Later on I struggled on another smaller hill. As soon as I started walking again, the crowd was on me so I started running again. At that point, I decided to make it a goal to keep my time under 4 hours as a way to keep on running. Eventually I rounded the final corner onto Boylston and could see that the finish line clock read 3:58 so I ran as hard as I could. The clock said 3:58 when I crossed but my official time was actually 3:57:11. Thanks strangers. 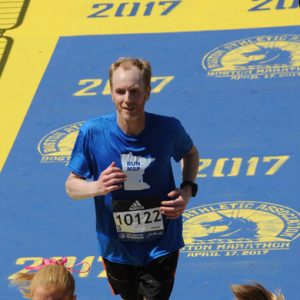 As I crossed the finish, I glanced over and saw Dick Hoyt waiting for his son, Rick. This is what it means to experience Boston. It was a moment that I will never forget.

Afterword I got my medal and sat down. I felt like I might throw up any second. After about 5 minutes of sitting, I got up and walked to the family greeting area and found my wife and daughters. When I sat down again my calves cramped up like they have never done before. I tried to stretch my leg but then the front of my leg cramped up. Then my thighs, my arms and ribs all simultaneously started cramping up. I yelled out in agony and let the expletives fly. You could see the muscles in my legs writhing all over the place. I showed my family and they thought it was freaky as hell. My wife told me later that I also seemed a little “out of it” and they started rethinking our travel plans. I got up and started limping toward the subway. Climbing stairs was excruciating but we eventually made it back to the hotel. Once there, I went to the men’s locker room and threw up, took a shower, packed my gear and we all headed to the airport. I ate a salad before the flight which helped my stomach feel better. There were a lot of people hobbling through the airport and one woman was still wearing here sweaty running clothes and marathon wrap. On the plane, a flight attendant congratulated all of the Boston finishers and said that she was incredibly jealous. Everyone clapped. The flight was fine and I felt much better by the time we arrived back in Minneapolis. 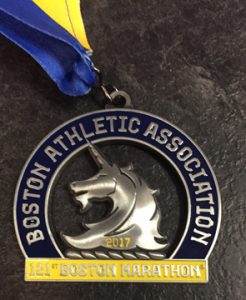 I realize that it sounds like an awful day but I actually can not stop thinking about how great it was. Especially the Boston Marathon spectators. The people of Boston have seen thousands of runners go through the exact same struggle for the past 121 years. They have seen it all and some have even been there themselves. These people have encouraged runners to go beyond their perceived limits through pouring rain, snow, sweltering heat and bombs going off. They have seen runners hauled off on stretchers and a couple have even died right before their eyes. These storied fans know runners like no other and they will be there next year to do it again. I can not believe I am saying this but I wish I could be there again next year too.