Only Two Weeks Away!

Time is flying so fast that I can’t keep up. It seems by the time I get used to saying that Boston is X number of weeks away, another week has alread passed. This weekend however, the reality hit me as I finished the last scheduled 20 mile run and realized that I have officially reached the taper portion of the plan. Half of the runs in the final two weeks are slow recovery runs and the longest distance is 12 miles.

I often get a little nervous about the final long run. If you experience any major issues, there is not a lot that you can do about it. The flipside is that if it goes well, you feel a sense of relief. You have the feeling that you are ready and your work is complete.

Fortunately, my final long run yesterday was the latter. In fact, it might have been my most successful 20 mile training run ever and I have done about 15 of them. This plan consisted of two 20 milers and I did them both on a route with a half-mile long hill strategically placed at mile 12 which I run up and down four times. This was to simulate the Newton Hills in Boston. The first time I did this run, it went well and I was even able to speed up to aerobic pace for the last mile. Yesterday’s run however went even better and I dashed through the final three miles at aerobic pace.

Now I can confidently say that I am ready for Boston. I wouldn’t have imagined myself ever saying that as recently as four weeks ago. I won’t delve on the frustrations that I encountered in training this winter since there are enough posts about that already. I will just mention that I struggling to maintain paces that seemed easy just 6 months earlier. Previously, I could glide through a 5 mile run at a 7:30 pace but this winter I was gasping for air 3 miles into a run at an 8:15 pace. Had I reached the point in life where I would just have to accept the fact that my best runs are all behind me? It was kind of depressing to be honest.

Then, about four weeks ago, things finally started to come around. I mean REALLY come around. The pivotal point was when I started running 800 meter intervals and threshold runs. Previously, I was concentrating on hill workouts and aerobic runs. I am not knowledgable enough to explain exactly why but I just wasn’t making much progess so switched to speed workouts instead and just doing hills in the middle of long runs.

The next week I did 7 x 800 meter intervals one day and 2 more the next day before a group run. I also did a 7 mile threshold run which was where I instantly noticed an improvement. It was supposed to be 8 miles at a 7:10 pace which just seemed impossilbe so I just decided to run as fast as I could. At mile 2 my average pace was 7:08 and by mile 7, it was still at 7:15 but it was apparent that I could no longer hold the pace. Instead of diminishing the results, I decided to stop at 7 and savor the success of the run. I reset the watch and ran the last mile as a cool down. I was only 5 sec./mile away from the seemingly impossible target pace! Two days after that was the first 20 mile run which I already mentioned was a success.

My confidence was returning and I am convinced that those grueling 800 meter intervals were the key. After seeing how well my body was responding to the workouts, I decided to just repeat the same routine the next week with a slight increase in volume. I added one more interval on Tuesday and one more on Wednesday for a total of 11. The long run that week was a half-marathon race on Saturday and a 2-hour run on Sunday. Since there were no available races, I just ran 13.1 as fast as I could and finished in 1:40 at a pace of 7:39. Again, I was kind blown away. The next day I ran slower for two hours which ended up being 14 miles. This week was more of the same and ended with the final 20 mile run that was also mentioned previously.

The 800 meter intervals can be pretty miserable but they really work. Each time, after the first one, I have a feeling that there is no way that I’ll be able to complete the workout. Then, one by one, I knock them off and before I realize it, I am on the last one. My typical route is up and down the streets in my neighborhood which happens to have a 40-foot hill running right through the middle of each interval. This has always frustrated me but now I think it might somehow add to their effectiveness.

I am really glad that I stuck with it. Had this been any other race, I honestly might have just said the hell with it and backed out to focus on another race that I could train for in more hospitable conditions. Whenever this thought crossed my mind I had to remind myself that, if I were to back out, what would that say about animal-based food being unessessary to accomplish things like this? This also might be a once-in-a-lifetime opportunity so I need to seize it.

Now all I need to do is stay healthy for the next two weeks and arrive at the starting line on time. 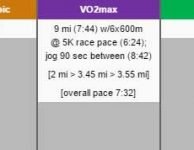 On The Road Back To Boston 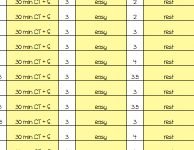 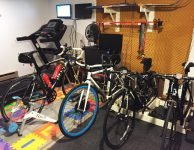