A New Milestone: 2000 Miles Running In A Year

After my last marathon in October, I needed something to keep myself running. One day while browsing through my Strava data I noticed that it I might actually reach 2000 miles of running by the end of the year if I picked up my mileage. It would not easy but it was totally doable. 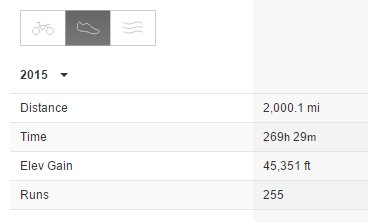 I threw together an Excel spreadsheet to analyze the numbers required to ding 2000 miles by December 20th. The result came to about five miles of running each day. Fortunately, the weather this fall could not have been more conducive and the only real issue was getting myself out of bed early.

Two weeks before the goal date I found myself behind schedule. To get back on track, I increased my mileage that week to 50. I am so glad I did that because entering the final week, all I had left was 32 miles. Perfect. On the morning of December 20 (the target date) I had only 3.8 miles left to go. I devised a special route that spelled out the digits 2-0-0-0 and would end at exactly 2000 miles. According to Google Earth, this special route was exactly 3.83 miles. This “should” ensure that I did not finish at the 1999.9 mile mark which I would consider a failure. 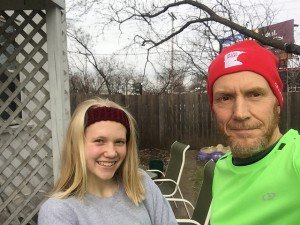 The oldest of my two daughters came along on the final run and helped to avoid taking any wrong turns. As we ran I envisioned that we were at the tip of a giant pen with no eraser and any mistakes we made would be permanent. Thankfully, the only issue we encountered was when we reached the finish. Instead of my watch saying 3.83 miles, it said we had only run 3.6. To rectify the error, we just doubled back over the first digit and two blocks later, we hit 3.86 miles.

I uploaded the data and crossed my fingers. If the total for the year came up short, there was no plan B. Upon finishing the upload, I peaked. the total mileage for the year said 2000.1 miles! Mission accomplished.

This is one achievement that I honestly do not think I will ever repeat but then again, I said the same thing after each of the first four marathons I finished. It is a little daunting to realize that you have to run an average of 5.47 miles for 365 consecutive days to hit 2000. Unless I become an ultra-runner, I do not see that happening again. I am about to purchase my fifth pair of shoes this year.