After doing well earlier this year in the Minneapolis Marathon, I had a change of plans. Instead of attempting a 50 mile race in the fall, I decided to see if I could up my training and qualify for the 2017 Boston marathon instead. The thought process was that – after training for and completing a 3:38 marathon – my fitness level should be high enough to begin a more advanced training regimen.

The training plan I picked was the Pfitzinger 70/18 Plan which is 18 weeks long and peaks at 70 miles/week. Next, I had to find a fall marathon. That very week, my mother in-law sent me a Duluth newspaper which contained a list of local races. On of them was a marathon in Ashland, WI called The WhistleStop Marathon. It was perfect so I registered and began training exactly one week after the Minneapolis Marathon. I won’t go into all of the details of the training program but I will say that it was a long, hard summer of running. Toward the end, it was obvious to me as well as my running friends that my pace and fitness had improved a lot. 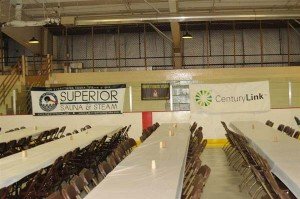 By the last week of tapering I knew that if I didn’t qualify, it wasn’t because I had not trained hard enough. I felt great, my weight was ideal, carbo-loading had gone perfectly and I had a pair of shoes slightly broken in. I was ready.

The evening before the race my family and I drove four hours to Ashland, WI. By the time we pulled into town it was dark and it was surprisingly difficult to find the Bay Area Civic Center where packet pick-up was being held until 9pm. The pasta meal was only open until 8pm and we arrived with 10 minutes to spare. When we saw that they even had meatless sauce, we went for it. I grabbed two plates – one for spaghetti and the other for salad and buns. Afterward we drove 35 miles to Lake Nebagamon where we were staying. I had a beer and some potato chips and went to bed at 11:30pm.

I awoke at 7am. The forecast was sunny with a strong wind from the SW. This would not be a problem since it would be on our back. The temperature was 42 degrees at the start but warming to 67 by noon. Not bad at all.

Breakfast was four slices of toast with PB & J washed down with several cups of coffee. I always drink coffee before a long run because, not only does it provide a shot of caffeine but it also causes you to “get ready for running” if you know what I mean. If you are a vegan then you definitely know what I mean. Let’s just say that I “got ready for running” twice that morning.

I put on a long-sleeve C9 running shirt, C9 running shorts with compression shorts underneath and Fitsok socks. Glide was applied to avoid chaffing along with some Nip-Guards. I also decided to employ my heart-rate strap and cadence meter. For nutrition, I just stuffed three gels into my Spi-Belt. Just before getting in the car I also took two Hammer Endurolytes to help avoid muscle cramping. We drove about ten miles and had no trouble finding the shuttle.

At this point, I told my wife that there would be no excuses for not qualifying today. All of the variables had fallen neatly into place and it was all up to me.

I got on the last bus but I still had plenty of time since we waited about 15 minutes before leaving. When we arrived everyone said they had been waiting for us so my bus-buddies and I went directly to the starting line. This was the first marathon I had seen with no pacers so I just picked a spot about 20% back from the front. 5.. 4.. 3.. 2.. 1.. GO!

The first mile was a paved road. My first thought was to start off at an 8:15 pace but it felt too slow so I picked up the pace and purposely avoided looking at my watch for a while. About a mile into the race, I turned the corner and got my first glimpse of the gravel trail. By mile two I had found a nice pace and decided to take a peak at my watch. 7:28!? This should have been way too fast but it wasn’t. It actually felt easy.

I could see about six runners far off in the distance and two more close up ahead. The surface
was loose gravel with rocks as large as 3 inches in diameter. Definitely NOT the limestone I was told it would be. There was a lot of jockeying around to find compact dirt but it didn’t seem to affect my pace at all.

As I approached the first water station, it occurred to me that I had not thought of a strategy for them. I decided to try stopping at every station like Hal Higdon advises. It actually works surprisingly well. You get a nice gulp, pour out the rest, throw the cup in the garbage and five seconds later you are running again. No splashing. I only had Powerade at a couple of stations and water at the rest.

By mile four I had passed the two men who were immediately in front of me. The group of four distant runners were only slightly closer. My pace had increased to 7:05 and my overall average was 7:16. There was nobody around me so at the water stops I got all the cheers. One woman who was holding a sign for someone named Rich at every station began calling me “Big Blue”. At mile ten, I ate the first of the three gels. The other two were eaten somewhere around miles 18 and 24. 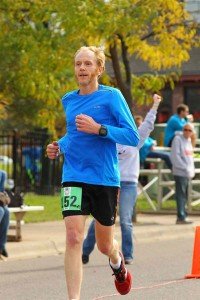 In the second half the surface became much more compacted and easier to run on. I was still feeling great and averaging the same 7:16 pace. Suddenly, a runner popped out of the woods and started running rather slowly so I passed him. I then noticed that the group up ahead was down to three. Soon another man from the group started falling back and I passed him. He told me I was running well and we wished each other good luck.

Soon I began to notice people walking down the trail which I thought was strange until I realized that they were half-marathoners who had started at mile 13 a half-hour earlier than us. By mile 20 I was still cruising at the exact same pace of 7:16 but I was sensing a little fatigue. One of the remaining two runners up ahead started to fall back and I was gaining on him. As I approached, I noticed that he was much younger than the others in the group. As I passed he asked “Aren’t you hot in the long-sleeve shirt?” which seemed like a strange introduction. I responded that it actually felt pretty good and after some chit-chat, I continued on.

By mile 22 I decided that I would try keeping my overall average pace under 7:30. This would bring me in somewhere around 3 hours and 16 minutes. This shouldn’t be a problem even if I slowed to an 8:00 pace. To my surprise, there still wasn’t anyone approaching behind me. I concentrated on my stride and remembered a conversation during my last group run where we talked about increasing cadence to improve your stride. At mile 23 I passed another runner. Nobody was talking at that point. Shortly afterward a spectator gave me a real boost of confidence when she told me that I looked like I was running a 5K. A block later I passed another runner. Before I knew it I was approaching the final corner. As I rounded the corner the clock read 3:17 and my family was cheering like crazy people. I crossed the finish line at 3:17:36. 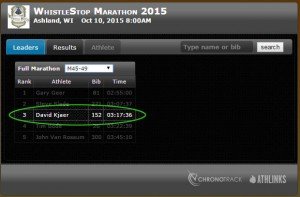 I actually didn’t feel too bad as I walked through the finishing chute. My family rushed over to congratulate me and my wife said she was positive that I was in the top 20. That just seemed too hard for me to believe. As far as my goal of qualifying for Boston – my time was 12 minutes and 22 seconds faster than my BQ time of 3:30. This means I actually get to register early which essentially guarantees entry to Boston. We went to the officials and got a receipt. There was a list of finishers hung up and it said that I had finished in 16th place out of 310 and third in me age group. My wife was right! This just seemed to surreal for me to believe.

Since my in-laws had their sauna warmed up and a pot of chili waiting for us we figured that we should head back home. I started to feel pretty good. After the sauna and chili I actually felt really good. So good that my family and I went for a 3 mile walk later that evening. 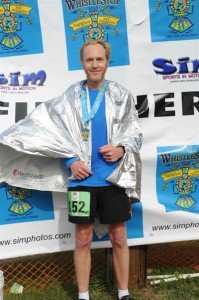 That night I had a tough time sleeping. I was still trying to wrap my head around all that had happened. As I laid there it occurred to me that races often give out awards to the top 3 finishers in each age group. In the morning I checked the website and my suspicion was confirmed. Shoot! I actually could have received a marathon award in front of a crowd! Oh well. After breakfast my family and I went for another 3 mile walk.

By Monday I was back in St. Louis Park and did a 7 mile recovery run. It felt really good and running was not a problem at all. That evening I emailed the race and told them about the great time I had and asked them if I could still receive the award. Thankfully, they were really nice about it and said they would be glad to send it.

This was a day that I will never forget. There are few things more satisfying than working hard to achieve a goal then shattering it. This race happened because I made a risk decision back in early June but it paid off big time. The 2015 WhistleStop Marathon will likely go down as the best race of my life. 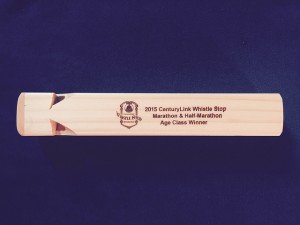