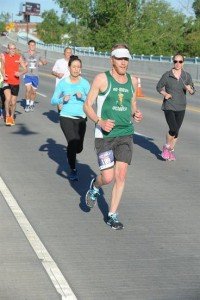 I didn’t think it was possible but I actually completed a marathon AND 18 weeks of training with ZERO problems. No injuries, no illnesses, race day weather was flawless and I was even able to stick with the training plan from start to finish. Even more important, I had fun. The result of this good luck was a race in which I actually surprised myself by shattering my old personal record. My previous two marathons were completed in times of 3:56 and 3:58. This race… 3:38!

Here’s my race day recap. The race had an especially early start time of 6:30 am so I woke up at 4:30 and had several cups of coffee and four slices of toast with pb & j. Feeling groggy, I listened to some old school emo and punk to get fired up. My wife woke up so I started getting ready. At 5:30 I came down and my wife mentioned a few things to make sure that I had not forgot them. I couldn’t believe it when she said “Nip Guards”. I forgot to put on Nip Guards and apply Glide. The race would have been a disaster if she had not reminded me. Once ready, my wife drove me to the start and I lined up near the 3:45 pacer. Not knowing what my pace would be, this seemed like a safe one to start with. Since it was still about 15 minutes before the start, I decided to sit down on a curb and conserve energy.

At 6:31 we were off! By the first mile, I began to think that the pace was too slow and decided to test try a faster pace. Soon I was running just under 8:00 min/mile which still felt too slow. By mile four I was running a what I thought was a nice, easy pace that I felt like I could maintain all day. I looked at my watch and couldn’t believe it when it read 7:45! I decided to go with it and see what happens.

Near mile six I caught up with the 3:35 pacer and a small group. After passing them, the number of runners in my vicinity declined dramatically. It was cool to see my family/cheering squad appear for the first time just before mile 10. I kept chugging along at a 7:35-7:50 pace and by mile 12, there were hardly runners around. It was kind of weird but kind of cool. Spectators would be cheering entirely for me as I passed by. It was like getting a little taste of what it must feel like to be at the front of the pack. 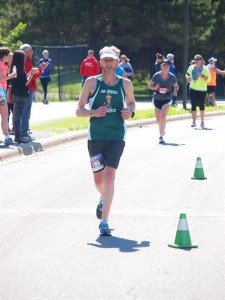 Miles 12 to 25 of the course was a down and back with the turnaround being at mile 18.5. Somewhere around mile 15 the front runner passed by on his way back. I gave him a cheer and wondered what it must be like to run like those guys. I also passed my family again about the same time and the told me that I was “killing it”. I pointed to my watch with an exagerated expression of disbelief. My average pace was 7:46 which was 3 seconds faster than my Boston qualifying pace.

I reached the turnaround and expected more than just a small cone. On my way back, it was a little weird to be passing by the people that I had previously passed. It kind of got to me so I pointed my gaze downward to hide my eyes with my visor. Shortly after the turnaround, my legs finally began to feel heavy and my pace slowed. It was time to make a decision. Try to force myself to somehow run through the pain and make an try to qualify for Boston or slow down and finish with a time that would be a guaranteed personal record. I chose the latter.

From mile 19 onward, my pace went from the 7:40’s to 9:00’s and my finishing goal went from 3:25 to staying under 3:40. As I write this three days later, I still don’t regret the decision. It was humbling to watch people pass by who I had passed earlier but I knew that there was no way for me to maintain a sub-8:00 pace. I heard another gentleman named Mike tell someone about being in the same situation. I told him that I was in the same boat and he laughed. We passed each other numerous times during the remainder of the race. 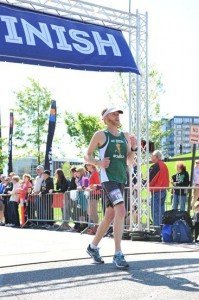 Starting at mile 24, there were some tough hills to climb so I decided to walk up knowing that running would leave me with nothing left once I reached the top. Mike did the same. At mile 25, Mike told me that we were climbing the last hill. He was right. Once at the top, the marathon and half-marathon courses merged together and I was surprised by how many half-marathoners there were. I have to admit that I felt a little cocky since I had just run twice as far but was still passing them.

At the 26 mile mark, I grabbed one last shot of water before tearing through the final stretch. Just before the finish line, a couple half-marathoners made a last minute sprint for the finish. I laughed and applauded them. Shortly after crossing the finish line, I grabbed a couple snacks. I saw Mike doing the same and congratulated him an a good race. Instantly, I began thinking about what I need to work on for the next race.