My wife has family in northern Wisconsin and sometimes, when my daughters have a day or two off from school and there is nothing going on with their swimming, they drive up to visit. This happens several times each year and since I have to work, I typically stay home. During these extended periods of “batching it”, I often enjoy watching a documentary that nobody else would be very interested in watching. My family laughs about how most of the time when they leave on these trips, I seem to find something new to be all fired up about and they have no idea what it will be when they walk in the door.

The reason that I mention this is because the last time that this happened, I watched a documentary about yoga. After watching it, I scoured the internet for more information and found that the yoga that most people in America are used to is actually quite different from traditional yoga which places a much greater emphasis on the mental aspects and the connection between our physical and spiritual beings. 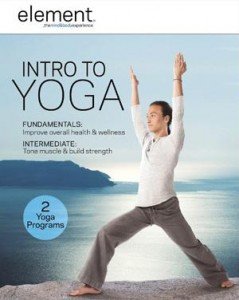 When my family returned home, they weren’t that surprised to find that I had found a new thing to be interested in and I think they were actually glad to hear that it was yoga. They all have either expressed interest in it and have attended a few yoga classes. That week, my wife picked up a couple of random DVD’s at the library where she volunteers.

The first DVD that she brought home was “Intro To Yoga” by Tamal Dodge. This DVD is exactly what I was looking for. Relatively easy poses with explanations about the benefits of each. Also, Tamal Dodge has a really likable demeanor which makes you interested in learning more.

Within a few minutes after hitting the ‘play’ button, it was obvious that yoga was something I should have tried years ago. There is no doubt that yoga will benefit runners, swimmers, skiers, pretty much anyone who does any athletic activity on a regular basis.interesting so I/we tried them out. First of all, I should mention that I had never done yoga before. In fact, I really wasn’t even sure what it was.

The first thing that most people think of when you mention yoga is flexibility. However, I believe that’s just the tip of the iceberg. What really surprised me about yoga was how it improves subtle attributes like concentration, breathing and body awareness. Things that never really crossed my mind until I realized how bad I was at them.

I have now logged over 20 hours since that first session. Besides the Tamal Dodge DVD, I also logged several hours with “Beginning Yoga” by Chrissy Carter and a few with “Yoga For Beginners” by Rodney Yee. Of the three, the Tamal Dodge is my favorite but the Carter disc is also great. The Yee disc is also good but I just like the other two a lot more. 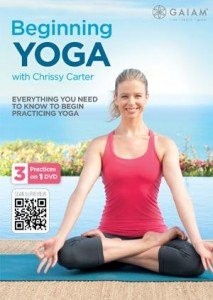 In addition to the 30 minute beginner workout, the Tamal Dodge disc also includes a 30 minute intermediate level workout. The first time I tried it I thought it was crazy but I kept going back to it.

Since then I have made a lot of improvement and can now make it all of the way through without any problem.

The Chrissy Carter disc only contains beginner level workouts but has a few really challenging moments. She occasionally offers some more challenging options as well. The hour long workout is broken into three sections which can also be done individually.I have even begun to include most of the more advanced moves. It’s definitely tough but I always make it through.

One thing I really like about is that it doesn’t exactly make you work hard. It stresses your body in a different way. Instead, it challenges you to do things with your body that you didn’t think it was capable of. And by stressing your body, you body responds by adapting itself to withstand the stress. Tamal says that we are spiritual beings in a physical body and yoga helps us bring the two together.

Now that I am reasonably comfortable with the basics, the next step is to try a class or group workout with a coach. I am still somewhat in disbelief that I am this excited about yoga. What a strange journey this has been so far.