But Plants Feel Pain Too

One of the things that really surprised me when I went vegan was how negatively some people react when the topic comes up. And of all the comments that I have heard people say when they react this way, this little gem is hands-down the most hilarious… 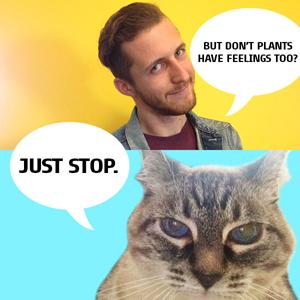 “Plants are alive and feel pain so killing plants is no better that killing animals.”

Really?  Let’s look at the levels of foolishness behind the statement that killing plants is equal to killing sentient beings…

1) Plants do respond to stimulus but that does not mean that they have a conscience.

There is no study that proves that plants are alive, are conscious or suffer pain. Reacting to stimulus does not equal being alive. If it was, you could say the same thing about a piece of metal that bends when heat is applied. Should we avoid cutting and drilling holes in metal because it is alive?

The feed conversion ratios for different types of meat are as follows. 7:1 for beef, 5:1 for pork and 2.5:1 for chicken. That is if you measure the mass of food. If you go by calories, eating meat is off the charts. Producing beef requires between 10 and 14 times more plants to produce the same number of calories as simply eating the plants. 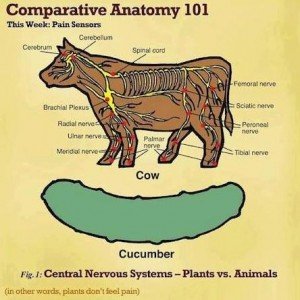 3) Referring to a plant as “dead” or “alive” does not refer to it’s state of consciousness.

Could this be where people get the impression that plants are sentient? If so, autumn must be a really sad time for these folks when they see piles of “dead” leaves. What do they think when peolpe say phrases such as “that business died years ago” or “that new paint job really makes your old car come alive”?

Pain is a defense mechanism. It makes you aware that something is wrong. When you are conscious of the pain, you suffer. Your brain intellectualizes pain and tries to find a solution. You can say there is a pain in my leg. An animal might start making noise or lie in some mud to ease the pain. Without a brain and nervous system, suffering does not exist. Without consciousness you can not suffer from pain. Even if plants were conscious, they do not have a nervous system or afferent neurons to carry messages. If a plant actually did feel pain, what could it do about it?

Saying that plants are sentient is the type of outrageous statement that someone makes when they realize that they have little or no chance of winning an argument and just don’t know how to end the debate gracefully. This I can understand. What is a mystery to me is why this is often the first thing that seemingly intelligent people bring up against veganism. I guess there really isn’t much left these days to use as an argument against veganism and all they are left with are last-ditch retorts.