Where Do You Get Your Protein?

People who are not familiar with vegan nutrition often assume it is really difficult to get enough protein on a vegan diet, and that’s if they even think there is any protein in plant foods at all.

Proteins are large molecules made up of chains of smaller molecules called amino acids. There are 20 different amino acids the body uses to make protein. Of these 20 amino acids, nine are called essential because your body can not make them and can only be aquired from food.

Plant-based foods are called incomplete proteins, since they often only provide some of the essential amino acids.

Herein lies the myth about protein and plants. That word “incomplete”. This word gives people the impression that plants are lacking in protein and consuming animal-based food is the only way to aquire all 9 of the essential amino acids. This conclusion however, couldn’t be more wrong. Here is why…

Although proteins from plant sources TEND to have a relatively low biological value, in comparison to protein from eggs or milk, they are nevertheless “complete” in that they contain at least trace amounts of all of the amino acids that are essential in human nutrition. Proteins in the human body tend to have a consistent percentage of the essential amino acids. The percentages of essential amino acids in both animal and soy products closely mimic those found in human proteins, and they are, therefore, considered complete or high-quality protein. Non-soy plant proteins have a lower percentage of at least one amino acid, although all legume products are pretty close to soy.

“Plant protein can meet requirements when a variety of plant foods

is consumed and energy needs are met. Research indicates that an assortment of plant foods eaten over the course of a day can provide all essential amino acids and ensure adequate nitrogen retention and use in healthy adults, thus complementary proteins do not need to be consumed at the same meal.”

Here is an interesting question. What is the actual medical term for protein deficiency? The answer is “Kwashiorkor”. The next time that you visit your doctor, ask them if they know. You will most likely discover that you know something about nutrition that your doctor doesn’t. Why? because Kwashiorkor is virtually non-existant in western civilization and in the few cases that have occurred, it was caused by an overall nutritional deficiency caused by starvation.

Check out the last paragraph of this article by Dr. John A. McDougall, MD. It is titled “Starving People Die of Fat, Not Protein, Deficiency”…

Did you know that you can get too much protein? Yes, you can. Not only can you get too much but it is actually a big concern in societies where the standard american diet (SAD) is prevalent. Hyperproteinemia is excess protein in the blood and causes proteinuria (excess of protein in the urine), Kidney Disease, kidney stones, Osteoporosis and greatly increases the risk of cancer.

Biochemist and former dairy farmer, Dr. T. Colin Campbell made the link between cancer and animal-based protein back in the early seventies. Interestingly, he also found that plant-based proteins did not have the same effect and did not increase the risk of certain cancers. He says that casein in particular is “the most significant carcinogen we consume.” 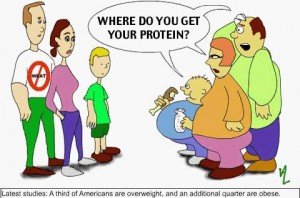 According to an article published in 2006 in the “International Journal of Sports Nutrition & Exercise Metabolism,” very high-protein diets, which can be defined as diets that advocate eating more than 200 grams of protein daily, raise the risk of certain conditions. These include hyperaminoacidemia, which is an excess of amino acids;, hyperammonemia, which results in an excess of ammonia; hyperinsulinemia nausea from an excess of insulin; and even early death. Some negative effects, including beginning hyperaminoacidemia and hyperammonemia, are observable after just one meal of 40 grams of protein or more, but those effects only become chronic and severe over time.

Source: LiveStrong: Symptoms Of Too Much Protein In The Diet

The reality is that if you eat food, be it animal-based or plant-based, you will get enough protein.

1) “Are you at all concerned about getting too much protein?”