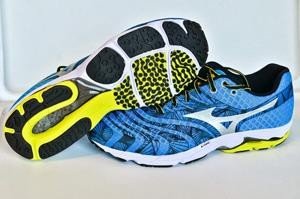 So I ran a marathon a little over a month ago and somewhere around mile 5 I noticed a slight pain in the arch of my right foot. I was wearing the same Asics Gel Lyte33 shoes that I had done all of my long training runs in so it seemed a little weird. The Gel Lyte’s are minimal shoes which weigh in at a mere 6.7 ounces. They are almost like socks with a thin piece of rubber glued to the bottom but I like them.

The pain wasn’t bad enough to stop running and I finished the marathon without any trouble but the pain kept resurfacing whenever I exceeded 2 or 3 miles of running. A few weeks later I went for a group run at a local running store where a Mizuno rep was letting people test their shoes. I laced up some a pair of Mizuno Wave Sayonara’s went for a 4.5 mile run. After the run, it occurred to me that the pain had not appeared. Maybe my foot had finally healed.

The next morning I put on my Asics HyperSpeed 4 shoes and did some speed workouts at a local track. During the second 1-mile repeat, the pain in my foot returned. Dang! It wasn’t healed at all. The Mizuno shoes had to be the reason why I didn’t have any pain in the group run.

The next day I returned to the store and purchased a pair of the Mizuno Sayonaras and immediately went out for a 6 mile run. The pain never surfaced. These shoes seemed to solve the problem with foot pain!

Here is the rub. After several runs in the Mizuno shoes, it was glaringly obvious that my pace was slower. Like 20 to 30 seconds per mile slower than when I wear the Asics Gel Lytes! I am still not sure why but I struggle to keep my pace under 8 minutes per mile while wearing the Mizunos but every run I do in the Asics average 7:30 to 7:40 minutes per mile.

I am not sure why but I have never seen shoes make such an impact on my pace. This could be a good thing however. If I can get my pace down to 7:40 in the Mizuno shoes than switch to the Asics, I might be able to reach a sub-7:15 pace. Train in the Mizuno Wave Sayonara’s and race in the Asics Gel Lyte33’s.