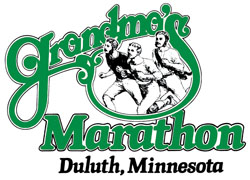 It seemed a little strange to step off of a bus in Two Harbors, MN knowing that my mode of transportation back to Duluth was by foot. Fortunately, the weather was perfect for a long run. Cloudy, 50 degrees and a nice tailwind.

The massive crowd of marathoners arrived primarily by bus and train. I ran into a few of the people who I run with at the local running store and chatted a bit before getting in line for the biff. As I was in the biff, they started singing the Star-Spangled Banner. Yikes!

I quickly made my way to the starting line which, by this time, was absolutely packed. The only entrance I could find was at the back which meant that you had to meander your way past the slower pace groups to get to the faster ones. It might be the only time that I was glad not to be a 2:30 marathoner. The 4:30 pacer was as far as I could get so I just went with it.

The race started and we were off! I started running at a pace of 9:15 min./mile and working my way through the crowd. It was hilarious to see all of the runners openly relieving themselves on the roadside for the first few miles. Women darting in and out of the woods and groups of men just standing in the ditch.

I caught up to the 4 hour pacer and settled in just behind the group that surrounded her. The 4 hour pace is just over 9 min./mile which seemed really slow but after my first two marathons, I knew that pushing the pace at this point was a bad idea.

At mile 10, I started to push the pace a little harder. Once I was a few minutes ahead of the 4 hour pacer, it was obvious that I should have running at this pace all along. People like to hover around that pacers and they attract crowds. Now I had all kinds of elbow room so I settled in on an 8:50 pace. The miles flew by. You could hear the waves from Lake Superior crashing on the shore and on occasional horn from a ship somewhere out in the fog. By mile 18 everything was still going as planned and I felt great.

The first time that my legs showed any signs of fatigue wasn’t until around mile 19. Knowing that Lemon Drop hill was up ahead, I decided to back off the pace a little to conserve energy. There was a water stop just before Lemon Drop which I walked through and ate a Gu Roctane gel. I managed to run all of the way up the hill but once at the top, I began to feel really exhausted. Sometime shortly after that, we took a turn to the right and another hill appeared that I wasn’t anticipating. This one was a lot smaller but it got to me and I resorted to walking up it. This is where a made one of the biggest mistakes of the day. As I was walking and staring at the ground, the 4 hour pacer somehow slipped by unnoticed!

When I reached the top, I began running again. My Garmin said that my average pace since the start was at 8:57. Even with the walking, I was still on schedule to reach the 4 hour mark. My legs were really not interested in maintaining the same pace but I slowly managed to get back up to speed. Even though I was struggling, I could tell that nearly every runner in sight was also having difficulty and I was passing quite a few people.

As I approached mile 24, I spotted a pacer in the distance surrounded by a crowd of runners. This didn’t make any sense. I wasn’t running fast enough to finish in 3:45 but the 4:00 pacer was behind me. As I got closer I realized that somehow, I was once again behind the 4 hour pacer. If she was running at a 4 hour pace and I finished behind her, I would be over 4 hours!

With two miles to go, it was time to summon what little energy I had left and turn on the afterburners. The street was wide enough for my to get around the outside of the group just before a final series of turns. Everyone around was battling to finish under the 4 hour mark just like I was. My family saw me at mile 25 and cheered which got me to smile briefly. One runner in front of me couldn’t bend his legs but his friends started running alongside him and cheering him on. We all pressed on around curve after curve after curve. Each turn would provide hope that the finish was just around the corner but after rounding the corner, all you saw was yet another turn off in the distance. The last mile seemed like it was ten.

Finally, after a really sharp acute angle turn, the finish line was visible. I ran with everything I could muster but remembered that there would cameras at the finish and the photos last a lifetime. I crossed the finish line with my fists in the air as a sign of victory with a time of 3:58:15.