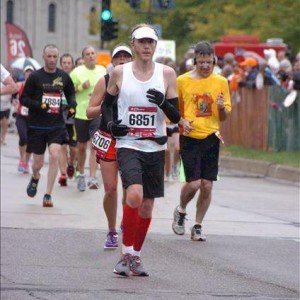 Everyone I know who runs marathons has done the Twin Cities Marathon. I tried to sign up for it last year but it was full. This year, I was determined to do the TC Marathon so I signed up the day that registration opened in February. My strategy was to maintain a slow enough pace to leave me with enough energy to speed up after mile 20. The idea of speeding up after 20 miles is easier said than done but if I had the discipline to keep it slow enough, it should work.

We lined up at the starting zone located on a street in front of the Metrodome. The weather was spectacular. Sunny and calm with a temperature in the upper 40’s. At 8 am, the starting gun went off and I was running through downtown Minneapolis with about 8500 other runners. There were massive crowds lining the streets. In fact, I noticed myself getting caught up in the excitement and running too fast on multiple occasions.

Just as planned, I was maintaining a slow, even pace but with all of the distractions, it seemed like no time at all before the 5 mile marker appeared. At mile 8, my pace was still an even 8:20 min/mile. The distance between the 3:45 pacer and myself was growing yet I still felt like I had barely been running. I was shocked by how fresh my legs still felt but also knew that speeding up this early on would be a horrible idea. The first time that I sensed any fatigue at all wasn’t until after the 14 mile mark. So far, so good.

Near mile 16, I heard someone close behind me saying words of encouragement. I looked to my left and saw the 3:45 pacer! I had forgotten to check my pace and unknowingly slowed down to 8:45 min/mile. At this point, I didn’t have as much energy but was still able to speed up. After creating a comfortable buffer ahead of the pacer again, I settled back to an 8:30 pace.

At mile 18, I grabbed some water but had trouble finding the salt tablets in my pouch. I had to stop to dig for them and suddenly, both of my calves cramped up. As I rubbed them, the 3:45 pacer caught up and ran by. With no time to lose, I took off. I had to keep him in sight. However, as soon as I tried to speed up, the cramps in my calves flared up. My only option was to run slow and hope my calves would recover somehow. 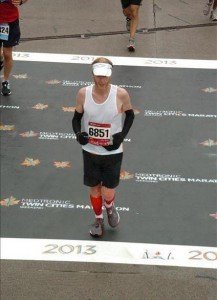 As I passed the 20 mile mark, I could only maintain a 10:30 pace but was definitely not “hitting the wall”. Ask anyone who has run the TC Marathon and they will likely mention Summit Avenue which is a gradual, 3 mile long incline that starts near the 21 mile mark. Even worse than that, however, is the series of steep hills leading up to Summit Ave. As soon as I started on the first hill, my legs instantly cramped. I had to walk up the hills. It was obvious that finishing under 3:45 was not going to happen so I decided to focus on 4:00. Once I reached Summit Ave., I started to run again but could only manage a 10:30 pace without cramping. It rained for about 15 minutes but it had no affect on the runners or spectators.

With only a mile left to go, I looked back. The 4:00 pacer was nowhere in sight so I decided to walk for a minute to let my calves recover. A gentleman ran by and said “Come on buddy, don’t walk. You need to finish under 4 hours”. I thanked him and he added, “You don’t want to finish in 4:01”. It was just what I needed to hear and I took off running again. Shortly after that, the finish line finally appeared! My legs were cramping hard but I was NOT going to walk across the finish line. The cramping had turned into full-blown Charlie Horses as I crossed the finish. I even looked down in order to hide the pain in the finishing photos. My official finish time was 3:56:28.