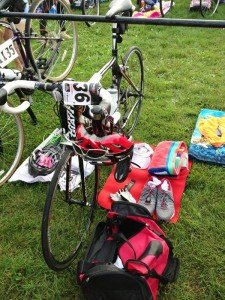 After the string of bad luck I had this year with race cancellations, I was finally able to achieve my goal of completing a triathlon this year. Last weekend my wife and I participated in a race named “One Last Tri”. The event is so named because it is the last outdoor triathlon of the season in Minnesota.

We woke at 5:30 on Sunday morning, had a snack, packed the van and were on the road by 6:20 AM. We arrived and setup our transition stations. Then we got our numbers stamped on our arms & legs and headed for the starting line. There was already a group of people doing swim warm ups. This was when I made the biggest mistake of the day – I skipped the warm-up swim.

While waiting for my age group to get called, I started getting really nervous. Then, before I knew it, I was standing on the starting line and a man said GO! I darted into the water and began swimming. Suddenly, the weirdest thing happened. Everything that I had practiced in the pool for the past year was completely forgotten. I could not swim. 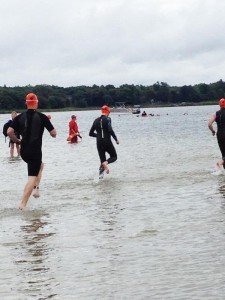 I raised my head and tried to think of what to do next. Should I head back to shore or keep moving? I remembered all of the people that had wished me luck and kept going. Then I discovered that I could swim backstroke surprisingly fast.

I tried freestyle again but as soon as my head went under, I started gasping for air. I was discouraged by how far I had left to go. The final buoy seemed like it was miles away so I figured it would be best to not look again for a long time. After several minutes of backstroking, I took another look and was thrilled to see the buoy about a pool length away. Once around the buoy, I went into freestyle and swam as fast as I could for the final stretch. I felt like kissing the sand when I reached the beach but there was too much time to make up and a mouthful of sand wouldn’t help matters.

My first transition took forever. In fact, my wife arrived after I did and left before me. I started to relax once I was on the bike. My mission was clear. Pass as many people as you can. 22 mph was about as fast as I could go without killing myself so I stayed in the 20-22 mph range for most of route. I almost didn’t even notice my wife when I passed by her. Only one rider passed me on the bike and he was doing the long course. After he passed, I sped up and trailed him for the last three miles into the finish. My overall speed on the bike was 19.6 mph. 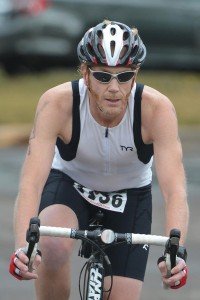 I flew into the bike finish line fast and ran to my station. A few seconds after I sat down to change my shoes, the speedy bike guy went running by. How the hell did he transition that fast? By the time I headed out for the run, he was long gone. Quick transitions really do make a difference.

I felt really sluggish for the first few hundred yards of the run. My Garmin still thought I was swimming since I had forgotten to hit a button so I had no idea what pace I was running at. After slowing my pace a little, my legs started to feel fresh again. The mode of transportation had changed but my mission was the same. Pass everyone you can.

I was pacing myself entirely by feel and it seemed to be a fast pace because nobody was catching up from behind. Then just before mile 2, I heard footsteps and heavy breathing slowly approaching. We ran alongside each other for about 50 yards before he slowly pulled ahead. I told him “nice job” and he said thanks. He was the only person to pass me on the run and like the guy on the bike, he was also doing the long course. 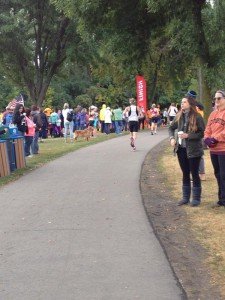 Shortly before I reached the finish line, I passed my wife who was just starting the run. We were going opposite directions and high-fived each other. I finished the 5k run in 21:42 (6:59 minutes/mile) which is a new PB. Feeling your pace works.

My daughters cheered as I crossed the finish line with an overall time of 1:21:35. As we waited for my wife to finish, it all started to sink in. I had finished a triathlon in the last possible event of the season. I can now call myself a triathlete. Can’t wait for next year.