Getting The Hang Of The Swimmer’s Lingo

Last week I decided to try an online training program for improving your swim technique. I got it through Training Peaks so each workout shows up on my calendar. It’s five day per week for four week and I am currently one week into it.

It has actually been a lot of fun so far but right away I noticed that I really need to learn the lingo. Each session is an array of drills with names like “Thumb Drill”, “3-6-3” and “6 K Switch”. Luckily, both of my daughters are competitive swimmers and were familiar with most of them but I still had to look up a few. Since my daughters were getting tired of me asking “what was this one again?”, I decided to compile and post them here for all to scrutinize…

Note: This will be an ongoing project and will probably get lots of edits.

Freestyle stroke with your hands clenched in a fist. This will help develop a good forearm pitch while pulling. It also shows you how important the arms are during this part of the stroke.  Some coaches have their students hold tennis balls or coins to ensure that their fists remain closed. 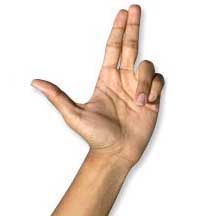 Similar to the Fist Drill except your hands make the “Heart Of Texas” sign instead of a fist. This allows you to use some of your hand but you’ll still need to rely on your entire arm to catch the water.

This is a standard freestyle stroke with a slight twist to it. Slow down the stroke rate slightly. Then just as your pulling hand is about to catch, allow it to slide out toward the pinky side for a moment then bring it back in.  Somehow, this simple motion triggers a connection all the way down the side of the body and helsp engage the muscles needed for a high-elbow catch.

Look straight down and make sure the waterline is on the back of the head. Place your arms to the side of your body and kick light and easy. Rotate when you take a breath then go back into a flat position and continue. This drill teaches your body to remain flat so you swim across the top of the water more efficiently.

Roll your body on its side. Place the lowest arm straight out in front pointing ahead. Rest the upper arm on your side. While your body is on its side, point your head straight down and take breathes to the side. Kick lightly and rotate every six or ten kicks. This will teach your body to be in a good position while it is rolled on the side during the freestyle stroke.

Everything is the same as the Side Body Balance Drill except you take a long, exaggerated arm stroke while rotating. After six or ten kicks, begin recovering the upper arm without moving the rest of your body and without dropping the extended arm. When the recovery arm is at the ear, lift the elbow of the extended arm, roll the hips, pull through and breathe. Once settled on the other side, start counting kicks again. Like the Side Body Balance Drill, this will help you become familiar with swimming on your side.

Point elbows high and drag fingertips on the water surface while bringing them from the back to front of the stroke. Set yourself up for a good “catch” when the hand enters the water again. This helps develop a more efficient arm recovery.

Swim the freestyle stroke but when the arm exits the water after a pull, stick out the thumb and drag it along your rib-cage all the way up to your arm pit. Keep that side of your body out of the water and the opposite arm straight out in front. Once your hand re-enters the water, snap the hips and rotate to the other side. This drill teaches your body to remain on its side as long as possible before rotating. Your body has less drag while it is rotated on the side so maximizing this time will make you more “slippery” in the water.

Start out with both hands straight out in front. Kick lightly. While keeping one arm straight out in front, start pulling with the other and do a full stroke. Once you bring it all the way around to the front again, repeat with the same arm. The shoulder opposite the working arm should barely come out of the water while the working arm is pulling.

This is the same as the One Arm Drill except you switch arms and rotate to the other side every other stroke. Make sure both arms are all the way in front before you switch. At least one arm should always be pointed straight forward.

This is a lot like the Six-Beat Switch except instead of simply rotating your body, you take three strokes while switching sides.  Start out doing six kicks while on your side. Then do three strokes. After the third stroke, you will be on the opposite side. Do six more kicks and repeat. Like the Six-Beat Switch, this helps improve your body rotation.

Place your body in the same position as the Side Body Balance drill. Do six kicks then bring the top arm across the surface and roll the body to the other side. Take a breath then do six kicks on the other side. Repeat. This helps develop a smooth body rotation.

Start out with both hands straight out in front. Kick lightly. While keeping one arm straight out in front, start pulling with the other. When you bring the arm back to the front, stop it at the halfway point and hold that position for six kicks. Your arm should be bent in a right angle at the elbow and your elbow pointing high with the hand pointing forward. The hand in the water should be about one foot below the surface. This position is similar to pulling back the string of a bow. After six kicks, let the high arm re-enter the water. Once both arms are out in front again, rotate and repeat on the other side. You might even take one “catch-up” stroke in between. This drill isolates the “catch” position so you can concentrate on it.

This is mix of the Bow & Arrow Drill and the Fingertip Tip Drill. Everything is the same as the Fingertip Drill except you stop the recovery arm at the halfway point like the Bow & Arrow Drill and hold that position for six kicks. During the paused phase, the elbow should be high and slightly forward. The forearm should be pointing down with the fingertips close to the water surface. The triangular shape of your arm will resemble a shark fin sticking out of the water. When the recovery hand re-enters the water, rotate and repeat. You might even take one “catch-up” stroke in between.

Roll your body on its side. Place the lowest arm straight out in front pointing ahead. Rest the upper arm on your side. While your body is on its side, point your head straight down and take breathes to the side. Kick lightly. After six or ten kicks, lift the top arm by the elbow and bring the hand forward until the thumb touches your forehead. This position will look like a salute. Lower the bottom straight to about 5-o’clock then rotate the elbow up into the catch position. Snap the top hip down while simultaneously driving the saluting arm into the water as you complete the pull with the other arm. Repeat on the other side. This will put emphasis on the timing of the downward hip snap and the pull motion of the opposite arm.  You can also add the Hesitation Drill and hold the salute position for four or six kicks.

This drill is simply the freestyle stroke with the head out of the water and looking forward. This drill helps you get used to how you will need to swim when sighting in open water. This might also come in handy if the water conditions are real choppy.