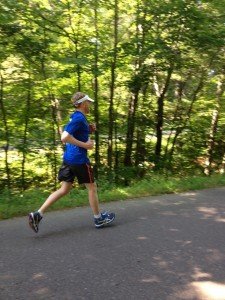 What an awesome 4-day weekend! My family and I went to the lake cabin so I brought all of my gear for swimming, biking and running. I had a lot of things to do and managed to knock them all off the list and then some.

I started early on the 4th with an 8-mile speed workout that was on my marathon training schedule. I’m always nervous of bears when I run at the cabin so my wife offered to tag along on her bike. I honestly doubt if it makes any difference to a bear but I feel less nervous with some else around. She also took the opportunity to get some photos and a video of me running which was really interesting to see.

Friday morning began with me swimming across the lake for the first time. I initially intended on just going out 90 yards to a buoy and back but the wind was blowing pretty hard. Just as I was about to tell my wife that I couldn’t swim in these conditions, she said I should take a shot at going across the bay. If it got too difficult, I could always just hop in the boat and head back. I figured “what the hell” and put my goggles on, walked into the water and started swimming. 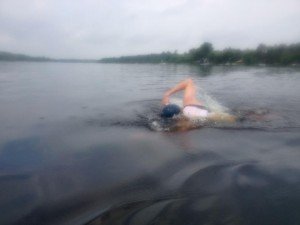 Knowing how far I had to go, I started out slow. After several minutes I poked my head up and discovered that I was about half way across.  Soon the bottom appeared and I stood up on the opposite side of the lake! I wasn’t exhausted at all but I still took a little break to take in the fact that I was no longer was I the only member of the family who had not swum across the lake.

On the other side, I again didn’t waste time thinking. I just lowered my goggles and started swimming. The wind was more of an issue this time but I was able to deal with it and before I knew it, the sandy bottom was visible and I stood up. I had gone across the lake and back for a total distance of 680 yards in choppy water without getting exhausted. Not only that but I also finished with one of the fastest paces that I had ever achieved.

Later on that same morning, my wife and I hopped on our bikes and had a nice, leisurely 13-mile ride around the lake. It was especially nice to bike along some rural highways with little traffic for a change.

On Saturday morning I ran the Dragin’ Tail 5-mile race in Lake Nebagamon, WI. I crossed the finish line 43rd out of 343 runners with a time of 38:17. I was shooting for a 7:40 pace and did it at 7:38. This is the third consecutive year that I have run this race and it has become one of the highlights of my summer.

Sunday morning began early with some more swimming. Early mornings are especially nice for swimming because there is rarely any wind and boat traffic minimal. This time I swam across the lake wearing a tri suit. No wet suit. When I reached the other side my wife and I switched places so she could get a turn at swimming while I followed in the kayak. Afterward, I did several swims out to a buoy and back which was a round-trip of 180 yards.

All of this swimming in open-water provided me with some good things to remember next weekend when I do my first triathlon.

This was my last chance to swim in open-water before my first triathlon next weekend and I took advantage of it. I’m feeling a lot better about the swim now and think I’m ready to go as long as I can keep from getting nervous at the starting line.

Like Loading...
Older
Training And Schedules Suck The Fun Out
Newer
My First Triathlon Turns Out To Be My First DNS