Finally Got To Test The New Wet Suit

I have lived in Minnesota my entire life and have never seen a spring with worse weather than the one we just experienced. My plan all winter long was to start open-water swimming (OWS) sometime in May and do as much OWS as possible through June. It became painfully obvious that things weren’t going to go as planned when May arrived and the lake where I swim in Northern Wisconsin was still a giant sheet of ice.

I have been monitoring the WI-DNR website and eagerly waiting for the water temperatures in the area to hit the mid 50’s. My father-in-law reported last week that he actually got a reading of 59 degrees and since my family actually had nothing planned, it was go time!

This is the lake where I learned how to swim last August after reading about Total Immersion and watching some YouTube videos. That was also the last time I had been in open water. In the ten months since then, I have read more books, watched more YouTube videos and logged over 30 miles of laps in the pool. I feel like a completely different swimmer now. Even though I am a lot more confident about my swimming, there is a world of difference between swimming 25 yard segments in a warm, clear pool with a handy line at the bottom to help you swim straight and OWS, where the water is cold, dark, possibly wavy and the shore can be a long ways away. I got a wet suit to deal with the cold, I can work on sighting to deal with the darkness and time my breathing so it’s between waves. The only real tough one for me is the feeling of being a long way from shore.

Everyone else in my family is a good swimmer and they have all made the 600 yard swim across the bay and back. My oldest daughter once did it 3 consecutive times! We always make sure to have someone in a kayak or paddle boat come along on these trips across the lake for two reasons: in case the swimmer needs a break and to alert other boats to steer clear. Unfortunately, it was too rainy this weekend for a spotter so I remained closer to shore. There is a buoy about 75 yards out that marks a large, underwater rock. Boats stay away from it and they rarely go between it and the shore so I decided to just swim laps out to it and back. 150 yards round trip. 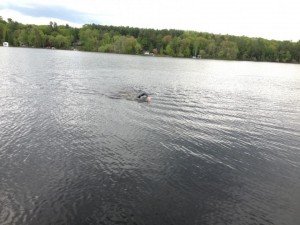 Nothing was visible underwater and I had no idea if I was on course or not. After about 20 strokes I stopped and was a little shocked to see that I was headed in almost a right angle to the direction I thought I was going. I had never realized this tendency to veer to the left before but because of it, I had to sight on a regular basis.

By the time I reached the buoy everything was going great. Without stopping, I rounded the corner and headed back. Shortly after that I suddenly had a feeling of panic and had to stop to calm myself. I was no more than 60 yards from shore but it seemed like a mile. I got back to the dock and had to take a break. It seemed odd to be so exhausted after only 150 yards of swimming but that’s what panic does. It causes your heart rate to spike and you become short of breath. Then the shortness of breath makes you panic more. It’s vitally important to break this loop quickly by calming yourself down. 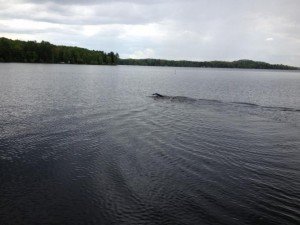 The second time out I rounded the buoy and again, a feeling of panic hit me. That was when I realized what was going on. I breath out of my left side. On the trip to the buoy, I face the open water. On the return trip I face the shore. As strange as it seems, the view of open water didn’t bother me but as soon as I actually saw the distance between me and the shore, I freaked. After I figured this out, I seemed to be more at ease with it. The 3rd time out I just prepared for it as I approached the buoy and swam back without a problem.

After the third lap, the rain was starting to pick up so I decided to call it a day. For only going a total of 450 yards, it seemed like a productive swim. I experienced being a long way from shore, got used to swimming in a wet suit, discovered that I need to work on swimming in a straight line and I familiarized myself with sighting in the open water. Can’t wait to get back. It’s time to try swimming across the bay.