Analyzing Trends In My Running Pace

I started doing speed workouts late last summer and again this spring. Both of these periods resulted in definite increases in my pace. This made me wonder what the history of my running pace might look like. When and how had my pace improved previously when I didn’t even know what speed workouts were?

I have detailed data going back to April 2011 when I began tracking my run and bike activities with a phone app named RunKeeper. Prior to that, I honestly didn’t pay much attention to pace. All I remember from those days is looking at the clock when I left and figuring out when I would be back by adding 10 minutes for each mile that I was planning to run. I had no idea if 10 min/mile was fast or slow compared to other runners but honestly didn’t care about it since I didn’t even know any other runners at the time. 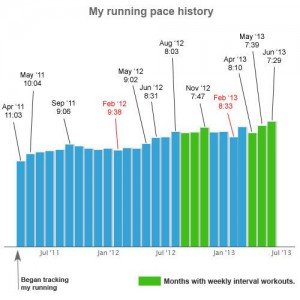 By the looks of things, I shouldn’t be real surprised if I don’t see huge increases in my speed for the rest of 2013. I guess we’ll see in October if these speed workouts are going to allow me to buck the trend.

I’ll also be interested to look at this in a decade or so to see when and where by pace peaks out at. Am I nearing maximum pace right now? If not, how much faster can I get and what age will I be when I hit the peak? This stuff reminds me of the John Bingham book that I just read.

Like Loading...
Older
Book: A Life Without Limits – A World Champion’s Journey
Newer
Finally Got To Test The New Wet Suit