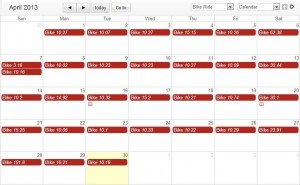 On March 31, I pledged at 30 Days Of Biking that I would ride every day in April. There was no mileage requirement. Whether you go around the block or commute to work, you just need to ride every single day. I decided to give myself a minimum distance of 10 miles. My reason for doing so was to motivate myself to ride more since I was training for a Century Ride on April 28.

There is no question that this pledge accomplished exactly what it was supposed to. This April was absolutely ferocious in Minneapolis. Not only was it the 3rd snowiest on record but it was also the 3rd coldest. Every week, seemed to be worse than the previous one. I definately would not have ridden many of those days if not for this pledge. In fact, if I had a crystal ball, I honestly don’t think I would have signed up knowing what I was in for but I don’t and I did.

Most days I just rode 10 miles but I also mixed in several 15 milers. On the 7th I did a short 3 mile ride in addition to my normal 10. I also threw in a couple 30 mile rides and one 60 miler in preparation for the 100 mile Ironman Bike Ride that I did on the 28th. Here is a calendar of bike rides complete with mileage.