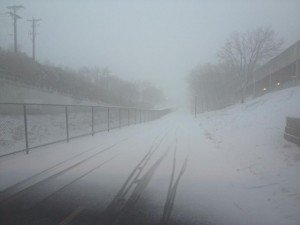 On the last day of March I went to the website 30 Days Of Biking and pledged that I would ride every single day in April. I also decided to give myself a personal minimum distance of 10 miles.

Today is the 11th and I am still going strong but man, what a brutal month it has been so far. I haven’t seen this much cold weather and snowage in April since I started my morning biking routine back in the mid 2000’s. There have been a lot of days so far in which it was 20 degrees or less when I rode. I just figured that it’s April so it should be getting nicer soon. It can’t get any worse, right? Wrong.

This morning I woke up at 4:30 am and heard some strange noises. After getting out of bed, I discovered that it was actually sleet hitting the windows. I cringed at the thought of getting on the bike in a few hours and venturing out into that. Yet, at 6:45 there I was, standing in my driveway waiting for my Garmin to somehow locate satellites through the intense mixture of snow and sleet that was now coming down. I thought for a moment about how many circles in my garage would it take to reach ten miles but quickly realized that doing math at that hour was probably more difficult than riding a bike in the snow. 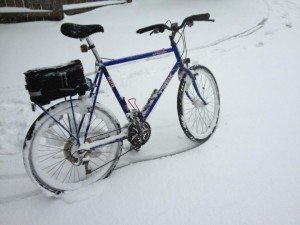 It was a tough ride and I came real close to wiping-out at least 5 times. Usually because of I either lost the path and my wheel caught the edge when I got back on or I would get my wheel stuck in a rut created by the track of another bike. I envy the dudes on fatbikes who effortlessly pass by with a greeting that subtly reveals the fact that they are actually enjoying this. Maybe I can save up for one of those next year.

I can’t say that is was a fun ride but it really felt awesome to pull into the driveway at the end. The picture on the left is my bike afterward. It’s also nice to be able to say that I still haven’t missed a day of riding over 10 miles but I am done making any more of those “this should be as bad as it gets” weather predictions.