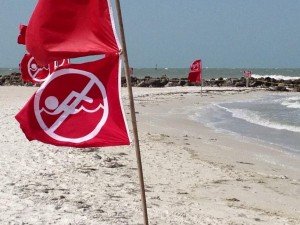 After learning how to swim right at the end of last summer, I decided to spend as much time as possible swimming laps through the winter.  I began going  3-4 times each week but in January I upped it to 4-5 times per week.  I typically went 18 laps each time but went for more if there was time.  My longest was 44 laps (1.25 miles).  I racked up about 35 miles total since October but was still eager to find out how well I would do in open water.

Last week, my family and I decided that we needed a break from the Minnesota weather and went to Tampa, FL.  The thought of being in the warm sun sounded nice but what sounded even more exciting to me was the realizing that this would allow me to test out my new swimming skills in open water.  Oh the irony of living in the land of 10,000 lakes and having my first open-water swim in the Gulf Of Mexico.

Unfortunately, the first three days of the four that we were in Tampa were unusually cold and windy.  We drove to Clearwater Beach the first day and we could barely walk along the beach because of the strong, bitter cold wind hitting us in the face.  Days 2 and 3… the same.  Finally on day 4 it warmed up and so decided to get to a beach.  Multiple people had recommended a beach named Siesta Key Beach so we decided to check it out.  Wow!  What a beach?  It was enormous with fine, white sand that looks like it came out of an hour glass and beautiful, clear water.  There was a slight wind and the waves seemed to be about 2 to 3 feet.

I walked in to check the water temperature and OMFG!  It was unbelievably cold.  After getting acclimated to the water I decided that the time had come.  I went back to shore and put on my goggles, ear plugs and nose plug and looked for a good route to take.  Another great feature of this beach is that the bottom remains an even 3-5 feet deep for about 50-100 yards from shore before it drops off.  Perfect. 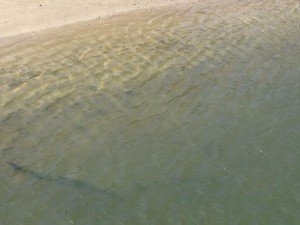 I found an area with no people, walked out and hit START on my Garmin before I could start thinking too much about it and get nervous.

Why would I be nervous? The night before, I made the mistake of looking up this beach on the internet. Everyone said that it’s a spectacular beach but I also discovered that the area around Tampa and Sarasota has a really high shark population this time of year. That would explain this photo that I took from a pier while watching manatees two days earlier. Notice the shark in the lower left. He was one of four that I could see within 10 yards of the shore. Several times while I was swimming, I would imagine one of these guys or maybe a larger bull or nurse shark watching me while I swam. I just kept reminding myself that they usually feed at dusk or dawn and shark attacks are extremely rare.

I swam parallel to the shore. The waves were hitting me on the right side so I did my breathing on the left.   What really surprised me was how little impact the waves really had on my stroke.  I thought they would throw of my rhythm and breathing but after a few strokes, I honestly forgot about the waves.  I couldn’t see them coming since I was facing away from them but a couple of times, I noticed them moving away after they had gone by. 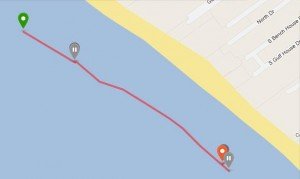 The biggest mistake that I made was bad pacing.  In the pool, my first couple of laps are always my fastest and I carried this bad habit into the open-water.  After about 100 yards, I had to stop and take a couple of deep breaths.  After that I was able to continue on at a slower but more even pace.  I maintained that until I reached 1/3 mile from where I initially began.  I headed toward the shore and walked up on the beach.  I had just done an open-water swim in the Gulf Of Mexico.

After about 15 minutes of staring into the water, the beach seemed extremely bright.  I looked back and couldn’t even see my family anymore.  As I made my way back I began to feel really cold.  When I got back, I sat on my towel and could not stop shivering for about 20 straight minutes.  We then realized that we had better leave if we wanted to catch our flight back to Minnesota.  Once in the car, I finally warmed up and felt normal again.

Once back in Minnesota, it seemed surreal to have sand in my hair and salt water on my skin from my swim in the Gulf Of Mexico earlier that day.