I’ll admit that I haven’t seen a doctor but I’m 99% sure that the pain in my ankle/foot is tendinitis.  It is the most frustrating running injury that I’ve had.  It initially felt like typical muscle pain in the ankle area but spread to my foot.  I basically have an ache or pain somewhere in my legs, knees, ankles or feet on any given day so I just dismissed it and thought that it would be gone after a day or two.  Unfortunately, after a week, it was worse than ever.

While visiting my in-laws over Thanksgiving, I decided to go for a 5-mile run.  During the run, the ankle/foot pain really kicked in and by mile 4, I was limping.  The rest of the day, it was sore and I made the decision right there to just stop running until it was either gone or I had at least figured out what it was. 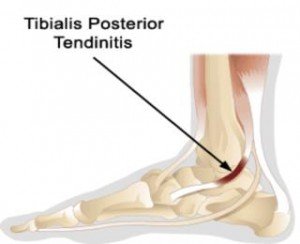 After searching the net, I came across something called Posterior Tibial Tendinitis (aka  PTT).  The more I read about it, the more convinced I was that PTT was the culprit.  Then while talking with a friend who is an avid runner, the inevitable question “How is the running coming along?” came up.  I described my experience and before I had even mentioned my conclusion, he instantly responded with “Sounds like tendinitis”.  After he described his multiple experiences with it, there was no doubt in my mind that PTT was the cause of my ankle pain.

In retrospect, I can trace the cause of this to a few months ago when I started to alter my running style.  See, I had run over 18 miles on three different occasions and all three of them, my knees got sore.  While trying to figure out why, it became obvious that my running form was really bad and likely the cause of my sore knees.  In particular, my posture wasn’t straight, I was heel-striking heavily and my foot was landing way too far out in front of my body.

To fix this, I concentrated on keeping my spine straight while running.  Good posture improves the airflow when you breathe which, in turn, let’s you run faster.  I also started to make sure that my feet were landing on the ground directly underneath my body instead of out in front.  This reduces the impact on your joints caused by heel-striking.  Not only that but if your heel hits the ground and your forefoot is still in the air, your forefoot slams down to the ground.  The muscles in your shin try to soften the impact but on long runs this stress will lead to sore shins.  If you run like this and think your stride is smooth, there are some YouTube videos of this in slow motion and it is anything but.

Well the changes to my stride in addition to the weekly speed workouts I was doing had a dramatic impact my average pace.  However, the downside is that I think I went a little too far in keeping my heel from making impact with the ground.  The tendon involved with PTT is the one that holds up the arch in your foot.  When I stand tip-toe, I can feel that there is substantial stress put on that area of my foot.  This leads me to believe that this is exactly what caused that tendon to get inflamed. In a way, I was running tip-toe.  From now on, I’m going to land as flat as possible on my foot since too far one way or the other seems to cause problems.

Anyway.  Tendinitis blows.  It takes FOREVER to go away.  I stopped running for almost a month and it was about 95% gone.  I made the mistake of going on a 5-mile run and it came back full-force the next day.  Thankfully, it only lasted a couple days this time but it was still frustrating.  This weekend – 6 weeks after the pain started – I ran a 3-miler on Sat. and another on Sunday and so far, it hasn’t come back.  Still a little discomfort if I move my foot a certain way but it’s really minor.  I’m still probably a few weeks away from running on a daily basis but I’ll take what I can get for now.  There are people on forums that say they have had to stop running for four months because of PTT so two months doesn’t seem so bad.

From my experience, if you think you have tendinitis, don’t mess around.  Just stop running for at least three weeks.  Then once it feels like it’s completely gone — wait another week.  Don’t try to “run through the pain”.   It’s frustrating but it just doesn’t go away if you keep running and even if it does, it could take months.  Personally, I’d rather just stop altogether and get back to full-speed again in a month or two.  Just think of it as a taper/recovery period and know that you’ll be able to start up again surprisingly close to where you left off.  I used the time to concentrate on biking and swimming.  Biking actually makes it feel better I was able to make some significant improvements in my swimming pace.