Things To Know When Running On A Track

Since I began running a few years ago, the only running that I have done has been on roads, running paths and an occasional trail. Having never been involved with track and field sports, I had never stepped foot on an oval running track. Recently, someone introduced to running speed workouts on a track. I discovered that there are some basic rules of etiquette involved with tracks so I thought it might be helpful to post a few that I have become familiar with so far…

1) Run counter-clockwise. If there are only a few people around, it is acceptable to run drills in which you run back & forth in the outermost lane. 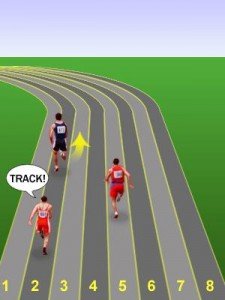 4) Don’t stand on the track or stop in the middle of it. If you just finished a run or need to stop, look behind to make sure nobody is approaching and, when the coast is clear, cross lanes until you are off the track. Basically, get off the track without interferring with anybody else’s run, then stop.

5) No headphones. I’m pretty sure that listening to music would be ok where I run but it would not be a good idea. Some tracks might even ban music devices. The type of running that people do on a track is more intense and you really need to be aware of what is going on around you. Not zoning out to music.

So far, the track that I’ve been going to has been really laid back and a few of the other runners even seemed to be as unaware of these rules as I was. Knowing  how to avoid undesirable situations and how to react when certain things happen will definitely help you feel more confident the first time you step out on the track.

Here are also a few facts that might also come in handy. The surface is padded. The standard length is 400 meters or .248 (roughly 1/4) of a mile around. A lane is 42″ wide on a high school track and 48″ on a college track. Arguably, the most useful tidbit of all is simply knowing that 4 laps = 1 mile. One more thing that you will likely notice is that your pace will be faster on a track. Don’t be surprised if you break a personal record or two.