The single biggest thing that is keeping me from signing up for a triathlon is swimming. I have never learned how so when I actually try to move, it basically amounts to a lot of splashing and me remaining basically in the same place. My wife is a good swimmer and both of my daughters are veteran synchronized swimmers.

My family and I enjoy going to the cabin in the summer where the kids basically swim all day long. There is a buoy about 100 yards from the shore that everyone can swim to but me. Not only that, they have all done the swim across the bay which is 300 yards. In fact, my daughters have both done it in both directions. My oldest daughter holds the record with three consecutive trips both directions. That’s a total of 1800 yards!

This means that if I wish to complete anything above a Sprint triathlon, I will have to swim almost as far as my daughter did. I will have to be able to tie her record distance. Me, the member of the family who can’t swim!

The first thing to learn is the front-crawl. My daughter took a look at my stroke and noticed right away that I needed to straighten my legs and told me to raise my elbows high when they come out of the water and keep them close to my head. I also must keep my face looking straight down until I come up for a breathe. This was something that I really struggled with at first. 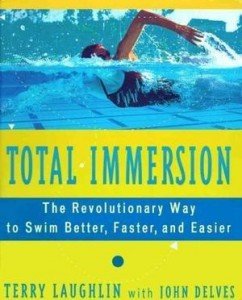 I did some research on the web and found something called Total Immersion that really interested me. TI is basically a variation of the front-crawl specifically designed for efficiency and long distance. It was developed by a gentleman named Terry Laughlin. Apparently, TI is very well known in the triathlon world. I mentioned this to my wife who found a book titled Total Immersion: The revolutionary Way To Swim Better, Faster and Easier which was written by Terry Laughlin himself. This book changed everything. Laughlin obviously spent a lot of time studying every detail of the front-crawl and determined that a lot of energy was being wasted. For instance, kicking adds approximately 10% of the power in your stroke however, your leg muscles are the largest in the body which also burn a lot of energy when used. It is more efficient just to use a small flutter-kick to rotate your body instead of contantly kicking for propulsion. The rotation of the body is what actually propels you through the water. He has also determined ways to make your body more “slippery” so it will require less energy to move through the water. After reading the first six chapters, I couldn’t wait to get back to the cabin. When I finally got into the lake and started practicing what I had read, it was a bit overwhelming. There are so many small details involved with the stroke that it’s hard to keep track of all of them while you are swimming. The only way is to train yourself to do them automatically. I was in the water a lot that first day but it was paying off. Two weeks prior, I struggled to swim from the shore to the end of the dock. This time however, I was going about 20 yards out in the lake and swimming around before returning to shore. I decided to set a goal of swimming to the buoy 100 yards away from shore by the end of the summer.

I bought some nose plugs and a kick board for practicing breathing in our 18′ backyard pool. I managed to go for as much as 15 minutes non-stop. A week later, my family and I went to an indoor pool and I tried swimming some laps. The first one was surprisingly easy and I eventually racked up 15 laps although I had to stop at the end of each length. It really allowed me to work on the details of the stroke which was starting to become more automatic and smooth.

When we returned to the lake again, I was feeling pretty confident after my success in the pool. I waded in and started to swim but suddenly everything felt awkward again. I didn’t realize how easy it is to get accustomed to pool swimming. Fortunately, after 10 or 15 minutes, things began to click again. After an hour, I set my sights on The Buoy. I started out strong but made the mistake of thinking about how far from shore I was which made my heart rate increase. By just concentrating on my stroke and not thinking about the shore, I was able to calm down. Before I knew it, the buoy was within reach and I still had plenty of energy to swim back. About half-way, I started to feel tired and stopped twice to rest. After treading water for a few seconds, I was able to continue. The Buoy had been conquered!

The biggest lesson that I learned from that swim was that I need to get used to the feeling of being a long way from shore. Making your heart rate increase can cause panic and exhaustion to occur at the worst possible time. This is going to require just swimming out a good yet comfortable distance and stay there for a while. Then again a little further out.

My family and I have since joined a fitness center so we can have access to an indoor pool all year long. I’m doing regular swims now and it is definately getting easier to go longer distances without pausing. The next goal is to swim the 300 yard distance across the bay.

Like Loading...
Older
Going From 2-Mile To 6-Mile Runs
Newer
Common Ailments Related To Running That I’ve Dealt With (So Far)