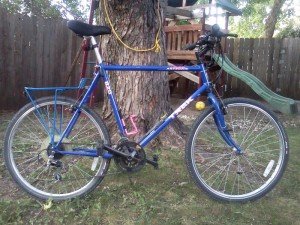 I decided to start biking on a regular basis in 2002 which meant dusting off the old 1989 Trek 820 that I bought new in 1990. The bike is a hybrid with a steel 54cm frame and 26 inch wheels. It originally came with knobby tires which I swapped for smooth, street tires. The handle bars are raised slightly for a more upright ride position. It has 7 gears and 3 ranges. I’ve been meaning to add some toe-clamps but  haven’t yet. I added a mirror, luggage rack and a bag to carry some tools and work clothes.

What makes this bike so nice is that it’s extremely reliable, relatively light-weight and feels at home on any terrain.

When I started riding a 9-mile route several days each week, my legs felt really sore but it soon disappeared and eventually, I began riding more often. Being a Minnesotan, I chose to stop during the winter months but would start up again each March. In 2007 I decided to switch to a 15-mile route which I rode until 2009 when I decided to run instead. In 2010, I reintroduced the 15-mile ride in addition to a 2-mile run before work.

This year I decided to start commuting to and from work which is 11 miles each way. I keep it slow in the mornings to avoid getting sweaty then pick up the pace on the ride home. It takes about an hour to get to work and about 45 minutes to ride home. Driving the same route takes about 30 minutes so biking really doesn’t make a big impact on my time.